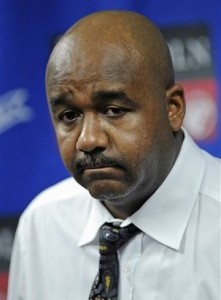 On Saturday afternoon, Villanova will be asked to defend it's home-away-from-home court when the Georgetown Hoyas come in to the Wells Fargo Center for a much-anticipated match-up. The Hoyas's vaunted backcourt was considered among the best in the nation in the preseason, but disappointments have seemed to flow from the loss of big man Greg Monroe.

They'll face off at Noon on Saturday . . . that is, if the 'Cats ever get home from Providence (in the meantime, they held Thursday practice at Brown University).

Villanova is coming off of an extremely disappointing loss at Providence. The Friars played a fast pace (74 possessions, which is only second to La Salle among 'Nova's opponents this year) and had little difficulty dealing with the 1-2-2 zone pressure that Jay Wright kept dialing up in transition, leaving the Friars more than a few easy baskets in the paint.

The Hoyas, while scoring quite efficiently (effective FG% of 57.8 -- 2nd in the country), have also struggled with turnovers and fouling this season. They are averaging over 14 turnovers per game this season, while generating an average of 9.6 turnovers per game against Big East opponents. They have also been very effective at the free-throw line, but have taken notably fewer trips there than opponents (Hoyas have attempted 153 FTs to opponents' 453 in Big East play).

Among their key players are Austin Freeman, the preseason Big East player of the year. He scores 18.3 points, grabs 3.2 rebounds and dishes 2.4 assists per game. Chris Wright is the best distributor on the team, however, with 5.6 assists on average to add to his 12.8 points. Jason Clark is the other player who averages double-digit points with 12.9 per game, along with 4.2 rebounds. Those three guards all play over 30 minutes per game and will combine to give the Villanova backcourt a run for it's money.

Sophomore Hollis Thompson and senior Julian Vaughn form the frontline for Georgetown. Though both average 8.7 points per game, Vaughn has averaged 6.5 rebounds and 2.2 blocks -- promising to give Mouph Yarou and Antonio Pena a workout.

Speaking of Pena, he got a shout-out in Luke Winn's Power Rankings this week (though not entirely good news):

Senior big man Antonio Pena isn't having a bad season on offense; his O-Rating of 114.4 is a career-high, up very slightly from '09-10. But this is a strange stat: In four of the Wildcats' seven Big East games, including Wednesday's loss at Providence, Pena hasn't made a single trip to the free-throw line. His season free-throw rate (FTA per 100 FGA) is just 26.2, which is notable because he ranked third in the Big East last season in that category with a rate of 61.3. And as a sophomore, his free-throw rate was 66.9. He's been a serviceable power forward in spite of this, but by avoiding contact in the paint, he's losing around two extra points per game -- as well as the chance to get opposing big men into foul trouble.

Pena has improved in a number of very noticeable ways from last season, but the Providence game really brought that particular nugget to my attention. Sure, Pena's role changed and has his playing further from the basket in many situations, but the team as a whole seems to struggle at times to draw a foul. Maybe Scottie Reynolds' innate ability to get to the line spoiled me for four seasons, but the ability to get easy points and maybe keep a star player from the opposition off of the court is going to be important for the 'Cats going forward.

Villanova's bigs will be important in this game. In their Big East losses, the Hoyas scored fewer than 60 points in each. Additionally, they scored only 65 points in a loss at Temple earlier in the season. One of the keys to beating the Hoyas, it seems it to slow the pace and control the ball -- a strategy that worked rather well for St. Johns earlier this month -- forcing Georgetown to play the game in the half-court.

After losing four of their first five Big East games, the Hoyas have won their last three (two on the road in New Jersey) and will likely be looking to extend their run in Philadelphia. Offensively, the Hoyas will undoubtedly be able to score points against the 'Cats, but a strong defensive effort should be able to keep their attack under control -- as good as Austin Freeman has been, he is not playing at the level of Marshon Brooks or Kemba Walker right now.

Nonetheless, the Hoyas are a team that likes to run, and they will break the press easily with three guards on the court if the 'Cats try to use it. They have three or four players who can shoot the three-ball (with Vaughn being the only starter to do all of his scoring inside), and will attempt to use that to their advantage against a 'Nova defense that often gives up easy three -pointers.

A commitment to playing this game in the half-court and forcing Georgetown to do the same will be key to winning, as will a strong performance by the 'Nova frontline, which will have to work the glass hard and take on some of the scoring load.

The game will tip off at Noon from the Wells Fargo Center in Philadelphia. The game will be broadcast live on ESPN.

Don't forget to check back for Ed's Closest to the Pin contest!