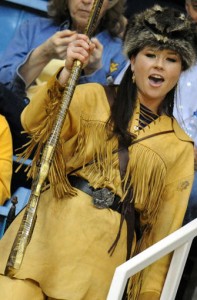 Since our last Q&A with Marquette was so popular, I thought maybe we should do it again. This time, I got in touch with West Virginia blogger, WVUIE97 from the Smoking Musket. As with the last one, I'll post his answers to my questions here, and you can find my responses to him over on his blog.

1) How much has depth been an issue for the Mountaineers this season? What was your reaction when you heard that Casey Mitchell would be back this weekend?

Funny you should mention depth. At the start of the season, it looked like Huggs could have gone 9-10 deep on the bench. Then a series of crazy events happened: one freshman didn't qualify, one was medically disqualified, and one was dismissed...then the last of the freshman had to have season ending surgery, then a guy gets up and leaves during a game. It's been nuts...couple that with Mitchell's latest suspension. With him out, WVU has only 8 scholarship players.

As far as Mitchell being back, your question was honestly the first I'd heard of it (I've been swamped with football NSD). It's not that surprising though. Our own 5th Year Senior even predicted it (not that it was a stretch) on our podcast recorded last weekend. Huggins was still non-committal about the situation as late as Thursday (LINK), not that this can't change quickly.

2) West Virginia gave Villanova a hell of a game in Philadelphia last year, with a Corey Fisher buzzer-beater taking the game to overtime, and a Scottie Reynolds miss giving your guys the win. Should we expect another tight game this year?

I hope so. This team seemed to be on a roll before, just to lay an egg on a somewhat neutral floor against a team that shouldn't have even have been in the same building, much less lose to them. Then Jennings left and Mitchell got suspended and things seem to be clicking again.

3) What were your expectations for WVU basketball coming into the season, and how have they changed?

I expected a team that would at least be able to compete every night. As far as post-season expectations, I was kinda open minded. I guess I expected at least a NCAA bid. They really aren't any different at the moment. A few weeks ago they were admittedly a bit lower.

4) If you could steal any Villanova player, past, future or present and suit them up in West Virginia's gold and blue, who would you pick and why?

I would have to choose Ed Pinckney. Anybody who did what he did against the Hoyas when it mattered most is a friend of mine.

5) It seems like the West Virginia defense has been really good this season, what should Villanovans expect to see from the Mountaineers in that department?

It's generally a mix of man-to-man and a match-up zone where they switch on every screen. Once in a while they might break out the 1-3-1 zone, but that seems to have become more rare as the season has progressed.

6) Coach Huggins shocked the world by wearing a three-piece suit at Big East Media Day, what are the chances he will try to give Jay Wright a run for his sartorial-money on Saturday?

Huggs can surprise with his suits from time to time, but as the season wears on, especially during the Big East grind and beyond, he just wants to be comfortable and seems to be most in the black slacks and black windbreaker. Jay Wright's best dressed award will be safe on Saturday, I believe.

7) Seriously, what ever happened to Kevin Pittsnogle?

Last I heard, he's a teacher back near his hometown of Martinsburg. As far as basketball goes, he's a player/coach for a local semi-pro team in Winchester, VA.

Thanks again to WVUIE97 for his help in putting this together. Don’t forget to check out my West Virginia game preview and to get your entries in for Closest to the Pin.