St. John's Q&A with Rumble in the Garden

Share All sharing options for: St. John's Q&A with Rumble in the Garden 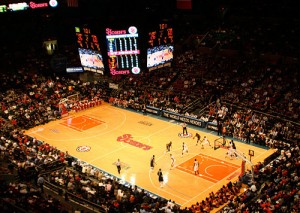 With one last home game upcoming, I reached out to two notable St. John's bloggers to answer a few questions about their program. First up is Pico, who you might remember as the proprietor of The East Coast Bias, where he hosted some great Big East Roundtables. Recently, however he took on a new challenge and is making the big bucks over at SBNation's Rumble in the Garden blog.

As is always the case, I also answered a few questions for him over on his blog. Without much more adieu, here are five questions with Pico:

1. St. Johns broke into the top-25 this week for the first time in a decade and they are tourney-bound to boot. What were your expectations before the season started (honestly, please) and have the Johnnies met or exceeded them?

TOTAL
DOMINATION
*cue music*
Only because you asked me kindly for honesty, I'll say that's a lie. I think my expectations were - and with my fingers very crossed - an 8th-9th place finish in the Big East that was highly dependent on a few teams becoming beatable - a few in the Connecticut/ Marquette/ Louisville/ Seton Hall/ Cincinnati grouping. And many of them became beatable, but not in the way I expected. I thought the Red Storm needed a lot of luck and a bump from a new coaching staff to get there.
I didn't think they would be top-25. It's a credit to the coaching depth in the Big East that the league is this crazily competitive - St. John's might STILL only be the 8th place team in the conference if they lose 1-2 games!
In conclusion - the team exceeded my expectations.

2. Your Johnnies have been somewhat bi-polar this season (not unlike Villanova), beating Duke at the Garden, but lost to St. Bonaventure at Carnesecca. What was the difference between those two teams?

The difference between the Johnnies then and now is a combination of confidence and an understanding of what they're supposed to do on defense. Everyone has their role now, they transition more fluidly from defense to offense, and to be honest, the rotation's much different.

3. What should Villanova expect on Saturday? If Villanova's shooters heat up, how can St. John's win?

Everyone's shooters have a chance to heat up against St. John's - it's part of the design. Look for St. John's to force turnovers in the paint, the get back in transition, to make the Wildcats throw skip passes a little quicker than they would like to. The defense isn't really about getting the other team to miss shots, it's about forcing turnovers and getting easy opportunities the other way.
But even if Villanova is firing on all cylinders, Dwight Hardy gets a little better every game, and understands how to make opportunity in little cracks.

4. Who do you give credit to, Coach Lavin, Coach Keady or was it inevitable and Norm Roberts would have taken this team to the tourney this season?

Keady is the big name in the mix, but Coach Lavin deserves credit, as do his assistants Mike Dunlap (the white-haired fellow you will see in Lavin's ear) and Rico Hines, who was a player development coach with Golden State. I think Lavin is the guy who loves this kind of chaotic defense, but the others help make it crisp.
The idea that "these are Norm's guys" and "oh they're seniors" is a bit disingenuous to me. It might be a bit of homerism/ Lavinism, but a few points on whether this uptick was inevitable:

5. The Red Storm has an insane number of seniors, can they repeat this success next year with all of that turnover?

Nope.
Nor should they be expected to. The Red Storm will be playing 7-9 freshmen in the rotation next year. Unless 1-4 of them are going to the NBA in the following year, that doesn't breed 20-win success. It's not very plausible. They will struggle, and build a new platform of success.

Thanks again to Pico for participating.

Please be sure to check out my game preview, the other Q&A with JohnnyJungle.com, and get your entries in for Closest to the Pin.