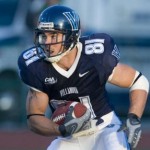 The final pre-decision Board of Trustees meeting took place this month, and topics related to the football program's invitation were discussed. While no public proclamations have been made by anyone in University administration, a few quiet actions may serve as a barometer for their leaning at this point.

Father Donohue and members of the athletics administration held a meeting for major boosters at the Syracuse basketball game. A meeting that reportedly included a speech from Coach Talley as well as pledges from some donors.

More interestingly, however, may be the news that prominent Trustees have been telegraphing their votes to major donors.
A source close to the program has passed along the information that prominent members of the Board have been approaching potential major donors to the program recently. That is in addition to fundraising being conducted by the Villanova Football Club.

With a fundraising goal of $25-35 million, it seems like the Board of Trustees is prepared to vote yes if that goal can be met.

The decision is largely a financial one at this point, after survey results showed a favorable response from the various groups included (students/alumni/area residents), and the administration is reportedly no longer concerned that attendance would be a major issue. These Board member's fundraising push shows that the power players seem to favor a "yes" vote right now.