Football has a PPL Problem?

Share All sharing options for: Football has a PPL Problem? 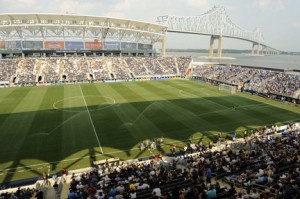 It was only a week ago that we reported that prominent trustees were actively raising money for the football team's proposed move to the Big East conference. While it still seems that the trustees are leaning toward a 'yes' vote next month if the fundraising is in place, new complications may make the decision a more difficult one.

Lately, it has emerged that the Big East conference has been lukewarm toward Villanova's preferred venue for games, PPL Park in Chester. The soccer-specific stadium currently seats only 18,500 fans, and while it would not be the smallest stadium in the Bowl Subdivision (both Idaho's Kibbie Dome and FIU Stadium are smaller), it would be the smallest stadium in the Big East conference by over 16,000 seats.

According to sources close to the situation, administrators at the University of Pittsburgh are unhappy with the idea of having such a small venue in the conference, and would prefer that Villanova plays it's home games at a venue that can hold a minimum of 35,000 fans (to match Cincinnati's Nippert Stadium).

Pittsburgh was also reportedly upset that Villanova has pushed the ultimate decision on this issue back until April, despite the fact that large the capital investment in moving from FCS to FBS football requires more due-diligence than a move from one FBS conference to another.

PPL Park seats 18,500 fans, but can potentially hold more fans in standing-room only areas. It was also designed with expansion in mind with a plan in place from the beginning to be able to expand seating to 30,000 fans without re-footing the building.

The Philadelphia Union drew almost 35,000 fans to their home opener at Lincoln Financial Field last season, and may not be opposed to expanding their new building sooner rather than later.

If plans to play at PPL Park were to be vetoed by the Big East conference, Villanova would be forced to either play home games at a different venue, or they may not be able to make the move at all. While $35million for a practice facility may be an attainable number, building a new off-campus 40,000-seat stadium would likely cost significantly more -- UConn's Rentschler Field cost approximately $91million to build, while UCF's Bright House Networks Stadium cost around $55million to build and Rebtschler was at least partially funded by the state.

Other current venues locally have their own issues. Franklin Field is an aging venue, that lacks the luxury features of PPL Park and has an undesirable location on the campus of another university. Recent renovations to the stadium might make it more bearable for Villanova fans, and the opening of a new park adjacent to it would at least allow an opportunity to tailgate on game days.

Meanwhile, Citizens Bank Park won't be available until after the Major League Baseball season (and probably the playoffs) are over in early November each year, and the layout of the baseball field may not be idea for watching or hosting football games.

Due to Temple's lease, Villanova likely cannot bid on Lincoln Financial Field until at least 2017, and Radnor Township will not allow a stadium of appropriate size to be built on-campus.

If Pitt successfully blocks Villanova's use of PPL Park, or causes the conference to waver on it's offer of financial assistance to the program (likely in the form of waived fees or pay-outs for playing away games during the transition), then it may not matter how the trustees feel about the move otherwise.