All of the talk about a Dominic Cheek transferring this offseason apparently got back to him. He clearly felt the need to respond tonight when he posted the following status on twitter:

If that isn't clear enough for you, he also "retweeted" -- a method of displaying someone else's comment to your Twitter followers -- a number of replies to his remark. Among them, this one (from a recognizable source):

As far as the Maalik Wayns rumors are concerned: We mentioned that some people had heard he was planning to leave Nova and go pro this summer and pointed out that he posted a somewhat soft-denial of that rumor on Twitter. Well, today I noticed this conversation between Wayns and Duke's Nolan Smith: 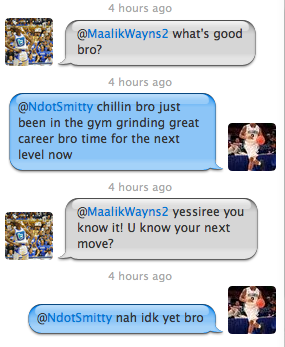 Based on that, it seems like the door is still at least cracked-open for Wayns to test the NBA waters this summer. I think that he will ultimately return to school and try to play himself into the first round (or better yet, the lottery).