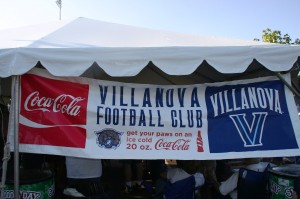 As reported earlier on this site and elsewhere, the first (and possibly only) choice for a football stadium, if the Board of Trustees were to approve a move the Big East Football conference, will be PPL Park. The Chester soccer stadium is owned by Delaware County, but is fully under the control of the Philadelphia Union of Major League Soccer -- meaning that any lease on the park would be through that organization.

It also means that any expansion of that stadium would have to be done with the approval and participation of the Union. Expansion would likely be a necessity of any move to BCS football, since 18,500 seats simply isn't enough for Big East football, where attendances in the 30-40,000 range are common.

There Union's CEO purposely didn't reveal much when asked about Villanova football by Christopher Vito of the Delco Times, noting:

We have had conversations with them, but I’m not prepared to give a progress update. No decision has been made," Sakiewicz said. "We’ve said it from the very beginning — this building is, first and foremost, a Philadelphia Union building. The seats in this building won’t change color. But in the modern day of running stadiums, you have to look to do other events.

. . . American football is something we can play in this building and, if the right opportunity comes along to do that, we will.

Those other events will include an upcoming Rugby championship and the NCAA Lacrosse quarterfinals in 2012.

At a recent meeting, the Villanova Football Club signed a letter to the Board, supporting the move to the Big East. Club president Art Contodina told Philly.com recently:

Right now, I think, from an administrative perspective, the major concern is financial, especially given the economic climate we're in. If you make that big of an investment, are you going to be able to fulfill the back end of it? I know one of the considerations will be that this move could solve some of those [support] problems, giving the school greater visibility from a national perspective.

We're not involved in the decision, nor do we have access to all the information that the people making the decision have. But we stand ready and willing to make the necessary financial commitment, rally the troops, so to speak, in terms of giving [more donations]. But we don't want to say it's all or nothing with this. Our main concern is success.

That financial commitment, would hopefully be dramatically increased to help cover some of the increased expenses of the move. The club currently has provided the program with annual support in the six-figure range -- their most recent annual contribution was around $250,000 earmarked for football. With a move, that annual support could increase into seven-figure territory, bringing any annual losses from Big East football closer to the $5million subsidy that the program currently requires

The extent of the football club's ability to raise annual financing has yet to be determined, but their support for the program in that regard has steadily risen since the club was founded.