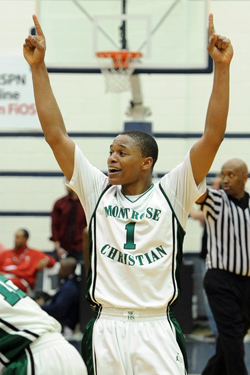 Game Results: Tyrone Johnson led Montrose Christian to a thrilling double-overtime victory over Quinn Cook and Oak Hill Academy 71-64 to win the ESPN RISE National High School Invitational Championship. Johnson won Tournament MVP honors with 21 points in the final and 11-for-11 free-throw shooting. Duke-bound Quinn Cook, the #39 ranked player in the country by ESPN, led Oak Hill with 25 pts, but was shut down in overtime by Johnson and fouled out in the second OT.

ESPN’s Ronnie Flores wrote, "Johnson was the hero of regulation for Montrose Christian. With 31 seconds left, Johnson hit two free throws to cut Montrose’s deficit to a basket. With 17 seconds remaining, Johnson tied the game on a short jumper and the only attempt Oak Hill could muster was a NBA range 3-pointer by Cook with four seconds remaining. "Tyrone has established himself as one of the best guards in the country," Vetter said. "Sometimes guys are a bit overlooked for the McDonald’s and Jordan game. He’s been way overlooked. The ball was in his hands at the end of the game, and we won it."

Pregame Report: Villanova signee, Tyrone Johnson, had 15 points and six assists as Montrose Christian knocked-off Boys & Girls (Brooklyn, NY) by a score of 83-61 in the National High School Invitational (NHSI) semifinals on Friday. Boys & Girls had advanced to the semifinal by beating Winter Park (FL), which is led by the nation’s top recruit, Austin Rivers. In an ESPN interview after the game, Johnson said, "Our goal is to win a national championship. That’s what we came here for. We’re going to play this game like it’s our last." We love your attitude, Tyrone, but save one of those national championships for Villanova!

You can see Tyrone in action again today at 2:00 PM on ESPN, as he leads his Mustangs against Oak Hill Academy (VA) in the NHSI Championship game. ESPN's Ronnie Flores writes, "This game has a great matchup between two terrific point guards in Oak Hill’s Quinn Cook and Montrose’s Tyrone Johnson," said ESPNU National Director of Basketball Recruiting Paul Biancardi, part of the broadcast team for Saturday’s telecast. "The team that makes the least mistakes and executes in the half court has the best chance to win this game."