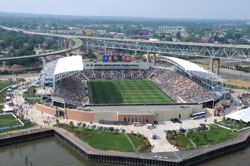 The Philadelphia Inquirer's Mike Jensen is reporting that there will be no vote on Villanova football's proposed move to the Big East conference this week after the football members of the Big East objected to the plan to play at PPL Park.

It was known to the Big East that PPL Park was Villanova's target venue for much of the process. In fact, the objection of some schools, with Pittsburgh being the most vocal, was known to Villanova since at least late February.

Opposition to Villanova's plan was reportedly not universal, and the 'Cats did receive some support among the 8 current football playing members. Naysayers were not swayed by talk of the potential for future expansion of PPL Park's capacity -- which could be increased to around 30,000 seats without significant structural changes (though expansion timelines and approval are at the mercy of the Union).

This is not the end of the process. According to a communication from Father Donohue, the Big East has requested more time to do due diligence regarding Villanova's proposed membership in the football conference. Villanova cannot proceed with any planned upgrade without a firm commitment from the Big East Conference.

Terry Toohey of the Delco Times confirms our report from last week that theVillanova Trustees were ready and willing to make the move to FBS official. The delay is on the part of the Big East conference and the few football members who were not prepared to support the upgrade plan on Sunday.

It is not yet known how much longer the Big East will delay this decision. They will likely want more information about PPL Park, it's ability to expand and any potential timeline for expansion. They may also want information on other venues in the area and their availability, such as Franklin Field or Citizens Bank Park.

Father Donohue sent the following letter to Students, Faculty and Staff about the matter: 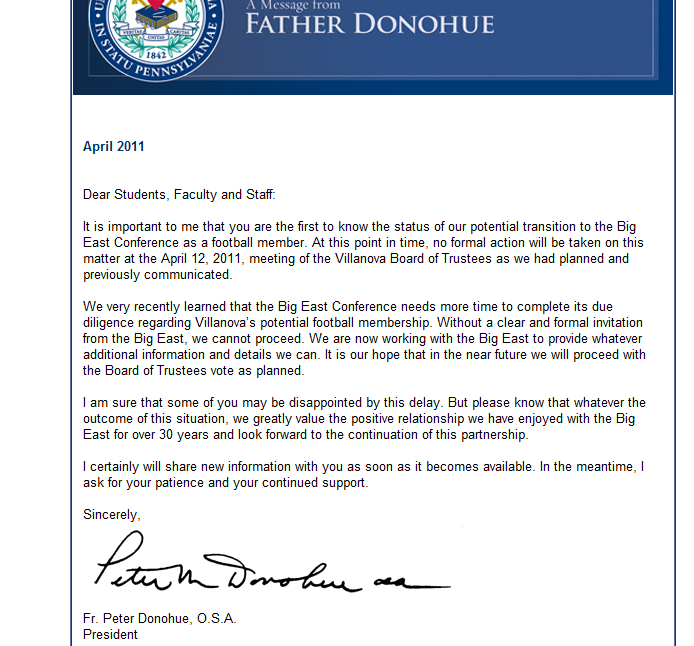 ADDED 4/11, 10:10AM: I did not think that I would have to write this, but it seems that some people may have misread my previous posts and are now questioning my sources and integrity. I fully stand by my previous article.

That the support of the Trustees was present for this move has not been denied by any source, nor has this setback been caused by Villanova. This delay was created by the Big East conference, and I had mentioned that possibility in my most recent prior report on the situation.

From my prior report on the matter:

Regarding the conference, my sources (one of whom is Father Peter himself), have stated just that, there are "a few issues to be worked out," with the Big East. As for what those issues are, we don’t know exactly.

A source close to the situation has relayed to VUhoops that the trustees in favor of this move currently have enough votes for the measure to pass on Tuesday. That news was, of course, pending the results of the discussions with the Big East as well as the final fundraising push.

It is always possible to make a typo or mistake. I will gladly post corrections to any error that is brought to my attention.