Villanova Football At A Crossroads: VoodooFive.com cites "VUSports.com's Erik Watkins reporting that the eight current football members of the Big East will participate in a conference call today to talk about Villanova's plan for moving up from FCS to FBS football. The eight schools will either accept the financial and facilities plan that Villanova presents, outright say no, or will ask for more information on their plan. The only [possible] snag is that Pitt is still not happy about Villanova's desire to play at the Philadelphia Union's PPL Park. The good news from [Erik Watkins], is that Villanova President Fr. Peter Donohue looks like he will give his blessing for the move up if the other Big East schools give the ok for expansion today. Philly.com reports that Villanova's football program is at a crossroads. "Most of the stars who led the Wildcats to the 2009 national title and a 2010 national semifinal appearance in the Football Championship Subdivision are gone. Meanwhile, the program waits to hear whether 'Nova is moving up to play Big East football. The Villanova board of trustees is scheduled to vote Tuesday on the move. Last week, football coach Andy Talley said, "I think it's been disconcerting for the coaching staff" waiting for that decision, understanding that a lot of issues arise - from recruiting to facilities - if Villanova moves up to I-A football."

VUHoops' Ewart Raises His Game. Brian, a lawyer and former Sports Editor for The Middletown Press in Connecticut, has brought journalistic excellence and professionalism to VUHoops. It has not gone unnoticed. In October, Brian was among the journalists covering The Big East’s National Media Day. One week later, he interviewed Jay Wright at Villanova's Basketball Media Day, doubling as reporter and camera man. In February, ESPN granted Brian an interview with Rece Davis on College Game Day at Villanova. This week, Brian raised his game to a whole new level. His long-running series, "Expansion Apocalypse"covering the possible upgrade of Villanova football to I-A level, was cited by both ESPN and The Sporting News. ESPN wrote, "The blog VUHoops.com, which has covered this story well, reports "Villanova has the votes to approve the jump up from FCS and that the Wildcats are likely to say yes." The Sporting News writes, "The blog VUHoops.com, a respected Web site that covers Wildcats’ basketball, has reported the board is expected to support the move." You really are awesome, Brian!

Ben Ijalana Could Be Picked in the First Round. The Star-Ledger reported that Ben Ijalana is widely considered among the top offensive linemen in the NFL draft and could be selected late in the first round or in the second round. The National Football Post reported that Ijalana put on a strong performance during his Villanova Pro Day workout, demonstrating that he has recovered from undergoing surgery to repair a sports hernia in December. With several NFL offensive line coaches watching [including four scouts from the New York Giants] Ijalana excelled in positional drills. And he ran the 40-yard dash in the 5.1 range, posting a 27-inch vertical leap and a 9-foot broad jump."

Villanova Stifles No. 17 Delaware, 10-4. Villanova.com reports that "No. 11 Villanova (8-3, 0-2) scored eight unanswered goals en route to a 10-4 victory over former CAA-rival and No. 17 Delaware (7-4, 3-0) on Saturday evening at Villanova Stadium." LAXPower.com reports, "Villanova (8-3), which was ranked as high as No. 5 nationally this season before dropping consecutive Big East setbacks to a pair of undefeated teams in No. 1 Syracuse and No. 2 Notre Dame. Seven different Wildcats got into the scoring act as Jack Rice scored three times and dished out an assist, Will Casertano scored twice and dished out one assist, and C.J. Small and Michael Vigilante each contributed a goal and two assists. Defensively, goalkeeper Billy Hurley made eight saves and Brian Karalunas, widely-regarded as one of the nations top stoppers, caused six turnovers and scooped up eight groundballs."

Katz Not a Fan of the Cats. Well, at least he's not a fan of Villanova's Cats. This week Mr. Katz released his 2011 preseason college basketball rankings and 'Nova was not among his top 25. The list is led by Kentucky, and includes six Big East teams -- Connecticut (#5), Syracuse (#7), Louisville (#8), Marquette (#14), Pittsburgh (#19) and Cincinnati (#22). Villanova is among five teams incluced on Katz's "Also Considered" list, which also includes Temple and West Virginia. However, all is not lost. Walterfootball.com (run by Paul Banks of the Washington Times) also released its 2011 Preseason Top 25, and ranks Villanova at #14. Mr. Banks writes, "After a second straight late-season tailspin, the pressure will be on Jay Wright next year. The Wildcats return blossoming big man Mouphtaou Yarou and talented point guard Maalik Wayns who will be handed the reins to the Wildcat offense now that the Coreys are gone. Guys like Dominic Cheek, Isaiah Armwood and James Bell will have to take their play to the next level for Villanova to reach its potential." 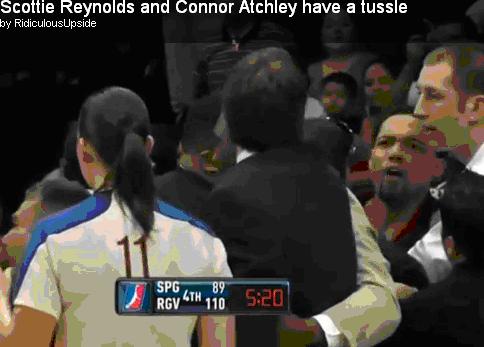 Scottie Reynolds to Take Up Boxing in the Offseason. Masslive.com reports that in the Springfield Armor’s last game of the season on April 2, Scottie Reynolds and the Rio Grand Valley Vipers’ Connor Atchley "got into full blows in the closing minutes. They had to be separated by players from both teams. Both players were ejected along with Vipers coach Chris Finch for being an instigator and the Vipers Terrel Harris for leaving the bench during the fight. Tension had been building in the second half between Atchley and Reynolds. First, Reynolds knocked Atchley in the face with his forearm in a play where no foul was called. Several minutes later, Atchley set a hard pick on Reynolds and was called for a foul. Then, the altercation happened a few minutes later. RediculousUpside.com posted a video of the altercation (see link below) for you boxing fans out there.

The Armor (13-38) finished the regular season having lost two of their last eight on the road." Scottie was a D-League All-Star and finished the season averaging 13.1 PPG, 5.9 APG and 3.8 RPG.