30 Years from the Day

Share All sharing options for: 30 Years from the Day 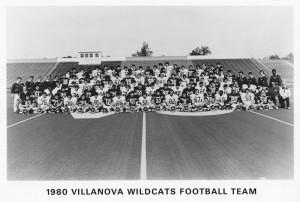 On the 30th anniversary of the day that the Villanova Board of Trustees met and surprised the university community with a pronouncement that there would be no more football on the Main Line, Philadelphia Sports Daily posted a memoir from former Villanova football student-manager, Jim DeLorezo, of the day.

If you have the time it is a great read. DeLorenzo really captures the moment in his writing and puts you in the head and heart of those closest to the football team in 1981:

April 14, 1981 was a beautiful day. Two days away from my birthday. Easter coming up that weekend. Spring practice went well that day. We got the laundry done quickly, ran back to our dorm rooms, trying to catch a Phillies game on TV, or a Rockford Files rerun, something we could do with the windows open and our boys wandering the halls and Rosemont take-out pizza on the way. And then the first call, the first signal. Something had happened.

What we did not know, could not have known, was that Villanova’s Board of Trustees, led in no small part by Father Deegan, had voted that afternoon to drop football. No questions. An over 80-year tradition at this small Catholic college, a team that had some bowl game success in the 1950s and 60s, a team that looked like it was on the upswing, a team that is mentioned prominently in the end credits of "Knute Rockne All-American," was, for Pete’s sake, done, over, finished.

Wouldn't it have been appropriate if Villanova had restored the football program to the Bowl Subdivision on the anniversary of it's demise?

Instead, Nova Nation will spend this somber anniversary waiting for word from the powers-that-be, over the fate of the program.