Share All sharing options for: The Week In Review (Week Ended April 16)

John Rooke, the radio "Voice of the Providence Friars," discusses the Villanova football controversy from the perspective of a non-football Big East school. He writes, "apparently, there are some (Rutgers? West Virginia? UConn?) who don’t believe Villanova is strong enough to actually benefit the current membership, since it will take time for them to become competitive in Big East football. And there are stadium issues like capacity and location – which means money – to confront as well. Add to this the national perception of the Big East as a weak link among the major conferences and a new direction may be warranted by some of the membership. What new direction could be explored? More expansion to include additional schools? Membership reduction? Or…a split between football and basketball members, long rumored to be inevitable anyway, which could leave programs like Providence College looking for a new home. There’s more than just a touch of irony here, seeing as PC was largely responsible for the creation of a conference that is no longer merely "big," in name only."

Brian Bennett of ESPN writes, "I'm flabbergasted that the league did not have its membership in line to make this decision, especially with the extra time they had while Villanova studied the issue. The stadium situation was well known for months. The Big East comes out of this looking silly for now, though all anyone will remember in the future is the eventual decision. This could still all get worked out, though I continue to believe that adding Villanova is a gamble not worth taking." 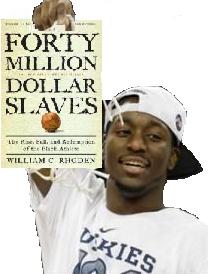 ESPN’s Diamond Leung reported that, "Connecticut star guard Kemba Walker announced he would forgo his senior season and enter the NBA draft." After leading Connecticut to the National Championship, his decision comes as no surprise. What is shocking, however, was that Mr. Leung reports that Walker appears to have gone through college having only recently completed reading an entire book for the first time. Walker confirmed this. "That's true," he said. "You can write that. It is the first book I've ever read." And what book was special enough for Kemba to call his first? Kemba lost his literary virginity to William C. Rhoden's Forty Million Dollar Slaves: The Rise, Fall, and Redemption of the Black Athlete. Walker remains on track to earn a degree his sociology degree from Connecticut after only three years.

Dr. Richard Lapchick, Director of University of Central Florida’s Institute for Diversity in Ethics published a study "Sport Keeping Score When It Counts: Graduation Success and Academic Progress Rates for the 2011 NCAA Division I Men’s Basketball Tournament Teams" His study found that "91 percent of white and 59 percent of African-American men’s Division I basketball student-athletes graduate." Villanova was among seven tournament teams that achieved a 100 percent graduate rate. The others were Belmont, Notre Dame, Wofford, Illinois, BYU, and Utah State." Don't miss the table at the end of this post, which provides the graduation rates of tournament teams from the Big East, the AP Top Ten, as well as the schools at the very bottom of the list.

Dave Seminara of the The Inquirer wrote a feature this week on ‘Nova-bound Tyrone Johnson. Here are some highlights that are sure to put a skip in your step. "[Montrose Christian Coach Stu] Vetter praises Johnson's work ethic and toughness."Tyrone has the ability to be an outstanding player in the Big East," Vetter said. "He's not only a point guard but a guy who can score. He'll be in the tradition of some of the other outstanding guards Villanova has had." … The fact that Villanova has a feeder system from [Montrose Christian], one of the nation's elite scholastic basketball programs bodes well for the Main Line school's future."We're definitely building something here," said Armwood, a Villanova forward who starred at Montrose. "With me and Mouph coming and now Tyrone, the next great player that comes through Montrose is obviously going to look at Villanova just because we went there." Tyrone knows at least two of Villanova's other top recruits and thinks that the team's future is bright. Achraf Yacoubou "is from New York, he's a solid 2-guard who can shoot and plays great defense - and he complements the point guards well," Johnson said. "And we've also got Markus Kennedy, who's a big man [6-9] who can bang inside, and he's a great off-the-court kid. "We're going to bring some energy, some spark as the freshman class. We want to come in and win right away." [Editor's Note: Don't forget Darrun Hilliard and JayVaughn Pinkston, assuming that all goes well with his upcoming trial.]

Philly.com reported that Villanova's Corey Fisher and Corey Stokes were selected to the Big Five first team and Maalik Wayns was selected on the second team. Ryan Feldman of CSNPhilly.com reports that Villanova’s Coreys -- Stokes and Fisher faced one another in the semifinals of the Portsmouth Invitational Tournament. "Stokes’ team, Cherry, Bekaert & Holland, defeated Fisher’s team, Portsmouth Sports Club, 97-72, but lost in the championship game. Fisher and Stokes were among 64 senior draft prospects that got to play three games in front of the NBA scouts. Stokes averaged 16.0 points, 3.0 rebounds and 2.7 assists per game while shooting 10 of 27 from three-point range in his three games. Fisher averaged 9.0 points, 6.0 assists and 3.0 rebounds per game while making 7 of 11 three-point attempts. "I think I showed them that I can handle the ball," said Stokes, who signed with agent Happy Walters of Rogue Sports. "A lot of people didn’t think I could handle the ball. I was playing point guard. I showed them I can rebound the ball and I’m a tough defender. NBA scouts in Portsmouth had mixed feelings about Fisher and Stokes "They could make the NBA sometime in the next five years, but I don't think they'll be in the league next year," one scout said. "I'd say both of them have a less than 50 percent chance of making a roster."

ESPN’s Jay Bilas writes in his article, What I’ll Remember from this Season, "[it] is cliche to say that 2010-11 was a "great" season. In my judgment, it was not. There were no great teams, but several very good ones. Much was expected of the Michigan State Spartans, Villanova Wildcats, Baylor Bears, Georgetown Hoyas and Minnesota Golden Gophers. Villanova lost 10 of its last 15 and seemed to lose its mojo."

Rotoworld.com reported that Dante Cunningham started again on April 11 and had 21 points, four boards, three assists, a steal and a block on 10-of-16 shooting in a win over the Nets." Dante started the last eight straight of the season and hit double figures in six of those games. Over his 22 games with the Bobcats after being traded by Portland, Dante averaged 24 MPG, 51%FGP, 4.0 RPG and 9.0 PPG. From his freshman year at Villanova, Dante has gotten better every year. Take note, Isaiah and Mouph. 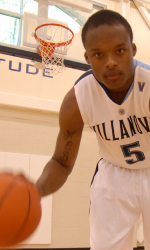 The Nova Notebook’s Mike Sheridan wrote a feature "Wayns Gets Used to Showing the Way." Mike quotes Maalik proclaiming, " 'I just want to be the ultimate leader for this program.' It won't hurt that the 6-2 guard comes naturally to the assignment in the same way that men like Randy Foye and Dwayne Anderson once did. He has studied for this role virtually since the day he committed to Villanova as a sophomore at Roman Catholic High School. In fact, the force of his personality was such that it helped steer pals Armwood and Cheek to become Wildcats. "It's a lot like what happened to me in high school," he says. "My first two years I watched and learned. Then it was my turn to lead." About the teams meltdown, Wayns said, "We played hard but maybe not as hard as we could have." "I think all of us who are coming back will have a little chip on our shoulder," he says. "It's not about proving anything to people. We just want to show the kind of team we are capable of being."

The Press Enterprise reports that the 2011 '76 Classic at the Anaheim Convention Center will be played over Thanksgiving weekend and feature Boston College, Oklahoma, New Mexico, Saint Louis, Santa Clara, Washington State, UC Riverside and Villanova. Games will be played Nov. 24, 25 and 27. Each team will compete in one game per day, advancing through a bracket-tournament format. The two teams that remain undefeated throughout will face off in the tournament championship Nov. 27. Tickets for the 2011 76 Classic will be available early summer.