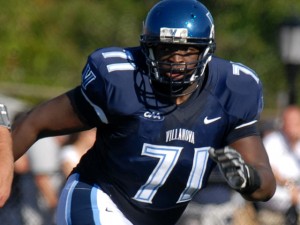 When Ben Ijalana first set foot on Villanova's campus, there was little hype or fanfare for the Wildcats' left tackle. His commitment wasn't broadcast live on ESPN, and there were no "stars" on his resume. Ijalana came to Villanova with thoughts of playing football and getting an education -- and not much else.

The criminal justice major had started for the Wildcats for all four of his years on the Main Line, but the NFL didn't become a consideration until his sophomore year, when his offensive line coach pulled him aside and told him he could make it. That was apparently the motivation he needed to become one of the nation's best linemen, evidenced by being only FCS player named to the Outland Trophy watchlist.

Though he didn't participate in the combine or the Senior Bowl due to a sports hernia that had been bothering him since the end of the football season, his pro-day workout was among the best-attended in Villanova's FCS-era, drawing representatives from at least 23 NFL teams (including the Eagles and Giants).

With this much hype, it isn't so much a question of whether Ijalana will be drafted, but a matter of when.

Draft experts seem to think that Ijalana could be picked as soon as the late first round, and not much later than the early third round. If picked in the first two rounds, he would be the highest NFL draft pick of Villanova's FCS era, while a third round selection would tie Brian Westbrook in that regard. The last Villanovan selected in the first round was Mike Siani, picked by the Raiders in 1972. The last to be picked in the second round was Hall of Famer Howie Long, also by the Raiders, in 1981.

Since you are all thinking it: the Raiders do not have a first round pick in this year's draft.

Though Mike Mayock (whose son and father were both Villanova football players) had been among the analysts who were highest on Ijalana early on, he does not project that the lineman will be a first-round pick. Only one of six NFL.com experts, Bucky Brooks, included him in their first round mock. ESPN's Mel Kiper left Ijalana's name out of his mock draft, and while Todd McShay agrees, he leaves open the possibility that the Wildcat could be picked up by Chicago, Pittsburgh or Green Bay at the end of the first.

I doubt any experts would be truly shocked to hear Ijalana's name called tonight, but most seem to expect to hear it tomorrow (rounds 2&3).

Almost no draft experts expect a Big East football player to be drafted in the first round, though athletic Pitt wide receiver Jonathan Baldwin has been projected in the early second round and could possibly sneak into the first round (or fall further due to character concerns).

Despite reports during the playoffs that Chris Whitney's career would end with the 2010 season, the winningest Wildcat QB was reportedly spotted working out for a few NFL teams, including the Green Bay Packers. Whitney wouldn't likely be drafted this weekend, but if his health is not an issue, he might get a chance as an undrafted free agent.

Another former Wildcat hoping to make an NFL roster the hard way is runningback Angelo Babbaro. Though considered undersized for the NFL at 5'9" and 195lbs (just slightly bigger than Wes Welker), Babbaro was a key player in Villanova's backfield for most of the past four years.

He played on all four special teams units, and was the understudy to Matt Szczur as the 'Cats return man and wildcat-formation QB.

At Villanova's Pro-Day, he took advantage of the scouts lined up to see Ben Ijalana and wowed them with a performance of his own. Babbaro ran the 40-yard dash in a blazing 4.39 seconds, did 20 reps at 225 pounds on the bench press, broad jumped 9 feet, 10 inches and had a 37-inch vertical.

It remains to be seen whether NFL teams will keep the lockout in place fully, or if they will be allowed to sign undrafted players after the draft concludes on Saturday. If they do sign players, Babbaro and other Villanovans, including Whitney, John Dempsey and Thomas Weaver, who have worked out and put their names in for consideration, could all find themselves with a new profession -- at least until training camp ends.

If not, it could be an awful long wait. Alternative options like the UFL or CFL will likely also present themselves for some.

The 2011 NFL Draft will be broadcast live, with Round 1 starting at 8:00PM Tonight on ESPN and the NFL Network. Rounds 2 & 3 kick off at 6:00PM on Friday, and the draft will conclude on Saturday, with rounds 4-7 starting at Noon.

UPDATE 4/29: Well, the first round is over, and Ijalana is still on the board. It would be a shock if his name isn't called during tomorrow's proceedings. For the sake of fairness, Pitt's Baldwin did sneak up into the first round and was selected, as was Muhammad Wilkerson of Temple.