First Villanovan picked in round 2 since 1981

Share All sharing options for: First Villanovan picked in round 2 since 1981 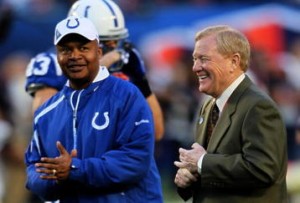 Ben Ijalana became Villanova's best NFL Draft pick since Howie Long when he was picked in the second round by the Colts tonight. He was the first player chosen from an FCS conference and the 49th player selected overall.

The Colts traded up four spots with the Jaguars to get the talented Wildcat.

It's not clear yet what position they drafted him to play. The Colts also selected Boston College offensive tackle Anthony Castonzo in the first round, and they may view Ijalana as a prospect at guard or right tackle. Scouts were divided on what position he projected to as a pro.

Ijalana has been very durable in college, starting all 53 games during his tenure on the Main Line, but an injury at the end of the season ultimately hurt his stock and prevented him from showing his skill at the Senior Bowl and Combine. He will get his chance to show the Colts what he can do in training camp now, assuming the lockout ever comes to an end.