More on the NFL Draft...

Share All sharing options for: More on the NFL Draft... 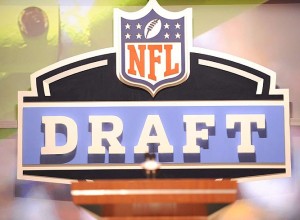 As we thought was likely, Villanova's likely draftee, Ben Ijalana was not selected in last night's opening round of the NFL draft, but barring a major slide down the draft-board, the offensive lineman (who is being considered as both a Guard and Right Tackle) will likely know his professional home by the end of tonight.

Mock drafts differ on when Ijalana will be picked, but most have his selection pegged for the second round. ESPN's Mel Kiper believes he will fall all the way to the Pittsburgh Steelers at the bottom of the round, while other mock drafts think he is far more in-demand. Evan Silva of ProFootballTalk has Ijalana going to the Vikings with the 47th pick in the draft, while Chad Reuter of CBSSports.com thinks that Ijalana will be a New York Giant at the end of the day.

Those projections are barring any trades, of course.

The earliest that he would likely be selected is 34th-overall, if the Bills decide to pull the trigger on him at their current spot rather than trade down or roll the dice that he will be there in the third. The Bills need help on their offensive line, and had Ijalana in for a visit at their facility recently. This wouldn't be the Bills' first experience with a Villanova lineman, however; center Christian Gaddis signed with their organization as an undrafted free agent prior to the 2007 season and made appearances on their 53-man roster in both 2007 and 2009.

Quite a few teams left need help on the offensive line, so Big Ben's chances look good, but in the mean time, we have heard word that Ben will be spending the bulk of his time, on this final Reading Day of his college career, studying. What good is a new house bought with NFL signing bonus money if you don't have a fancy diploma to hang on the wall?

For the rest of Villanova football's graduating class, the wait will continue. It will be a shocker if any other names are called this weekend (though we will be following this anyway), but phone calls from team representatives offering an undrafted free-agent contract or try-out are met with the same enthusiasm.

When those calls are placed will depend largely upon whether the United States Court of Appeals (8th Circuit) issues a stay of the lower-court judge's ruling that ended the lock-out. The decision on that stay could come as early as today, and some reports trickling out have suggested that the circuit court will issue that stay -- re-instating the lockout until after the Owners' appeal has been heard and decided.

With a stay in place, players like Angelo Babbaro may have to wait a while longer to hear if they will be heading to training camp this summer or looking for other opportunities. If the circuit court were to deny a stay, undrafted players would be able to sign with teams as early as Sunday or Monday.

Ben Ijalana would be the 75th Villanova football player selected in the NFL draft. The most recent to be selected was Tight End Matt Sherry, who was selected by the Cincinnati Bengals in the 6th round in 2008. Prior to that, Brian Westbrook was famously picked in the third-round by the Eagles in 2001.

Three Villanovans have been selected in the first round of the draft, the most recent being Mike Siani in 1972. Ralph Pasquariello was the 9th overall selection (highest ever for a Wildcat) by the Rams in 1949 and Richie Moore was picked up 12th overall by the Packers in 1968.

Four Villanovans were selected in the second round, including Hall of Fame defensive lineman Howie Long, picked 48th-overall by the Raiders (interestingly, the same spot they will pick at this year). Joining Long are John Babinecz (1971), John Sandusky (1949) and Eddie Micheals (1935). Micheals also has the honor of being the first Villanova Wildcat to ever be drafted to play in the NFL.

The NFL Draft resumes tonight at 6:ooPM with the 2nd and 3rd rounds.

Check back on VUhoops.com for news on Villanova players' NFL destinations. We will be covering every 'Cat headed to training camp -- including the best coverage of UDFA signing and try-out invitations.