Share All sharing options for: The Week In Review (Week Ended April 30)

Brian of VUHoops reported that "Ben Ijalana became Villanova’s best NFL Draft pick since Howie Long when he was picked in the second round by the Colts tonight. He was the first player chosen from an FCS conference and the 49th player selected overall."

ESPN’s Henry Abbott lists Villanova’s Jay Wright among the nine current college coaches that are the most likely candidates for NBA teams is in search of a new leader. About Jay, he writes, "Plenty of respect for the Villanova coach's abilities, but some speculate he may have stayed in college too long." The other college coaches on his list are Mike Krzyzewski (Duke), John Calipari (Kentucky), Sean Miller (Arizona), John Groce (OSU), Brad Stevens (Butler), Billy Donovan (Florida), Jamie Dixon (Pitt) and Bill Self (Kansas).

Cinderella Butler University did not face Villanova during the 2010-11 season, but that did not prevent Butler from stealing a big one from 'Nova. This week, James Danko, who had been Dean of Villanova School of Business since 2005, was named president of Butler. During Dean Danko's tenure, "he has cemented Villanova's spot among the nation’s elite undergraduate business schools. The program is currently ranked seventh in Bloomberg Businessweek’s ranking of undergraduate business schools." In a letter announcing the move, Fr. Donohue wrote, " Jim has prioritized the recognition of VSB faculty scholarship and expertise, and Villanova business faculty are now regularly highlighted in media outlets worldwide, yielding millions of media impressions annually."

ESPN reports that the "NCAA's Board of Directors adopted changes that will take effect next season and could have a significant impact on those in the two highest-profile college sports. Football players could be suspended for up to four games, starting in 2012, if they fail to earn at least nine credit hours in the fall semester -- or eight on a quarterly system. Basketball players must decide before the first day of the spring signing period, typically mid-April, to pull out of the draft and retain their college eligibility. This year, players have until May 8 to withdraw from the draft."

VUHoops reported on April 16 that Connecticut had the poorest graduation rate (31%) among Big East teams in this year’s men’s NCAA basketball tournament. Villanova and Notre Dame had the highest at 100%. Further undermining Connecticut’s academic reputation were reports that Kemba Walker admitted to reading only one book cover to cover in his lifetime. The Associated Press reports that Jim Calhoun and star guard Kemba Walker defended the program's academic reputation Wednesday, amid concern the national champions could lose scholarships based on academic performance. "[There's] a big emphasis on academics at UConn," Walker said. "They make sure we are student-athletes first. I'm going to get my degree. I will find time to do my work." Calhoun, who also faces a three-game suspension next season for the NCAA violations, says he still hasn't decided whether he will return to UConn or retire. He said he will make that decision sometime this summer but has no real timetable."

Doug Gottlieb of ESPN reports that only "15 of the 30 second-round picks from the 2010 draft played in the NBA last year, with only Landry Fields averaging over 15 minutes per game. [Editor's Note: Villanova's Dante Cunningham, drafted in the second round (overall #33) in the 2009 draft, averaged 21.0 MPG over the course of the season with Portland and Charlotte). In fact, only 43 of the 90 second-round picks over the last three years are still in the league right now. So even if you are picked, it does not mean you will stay in the NBA. On the other hand, this is a wide-open draft and the remaining fence sitters have some thinking to do." 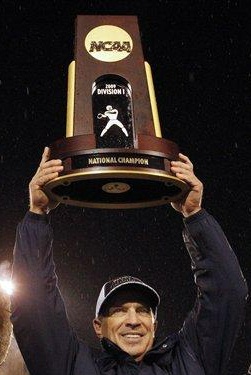 With regard to the Big East’s ongoing deliberations over the possible admission of Villanova football, Brian Bennett of ESPN writes "it’s a tricky situation for John Marinatto and the conference leadership, who ultimately are hired to represent every member institution in the Big East. That means their job is to look out for the Seton Halls and DePauls of the world as well as the West Virginias and Rutgers. I totally get why the conference wants to protect its basketball brand, which is really valuable and a proven commodity for TV revenue. I personally would like to see the Big East trim some of the underperforming basketball-only schools and add a strong football program or two."

No. 9 Villanova men's lacrosse team (10-3, 2-2 BIG EAST) defeated Rutgers 12-7 this week at Villanova Stadium in Philadelphia, Pa. Laxpower.com makes its predictions of possible NCAA lacrosse pairings, and has Villanova among the bubble teams likely to make the 16-team tournament. About Villanova, they write, "(#4 RPI, #9 SOS, QWs - Penn (12); Princeton (16); Penn State (17)). A top-5 RPI has been a guarantee as a tournament team in years past. I have [Villanova] on the bubble due to their lack of top-10 RPI wins. The Wildcats would love to see Penn win the Ivy League and become a top-10 win to solidify their resume." Laxpower’s bracketologists predict that Villanova will be paired against #6 Maryland in the opening round.