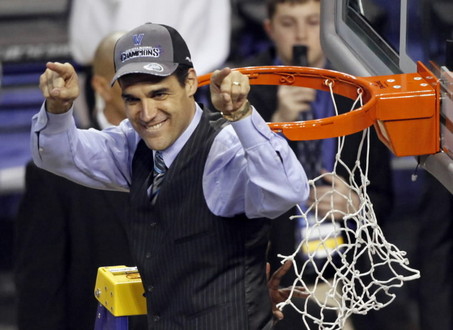 When Gary Williams announced his retirement yesterday it took just moments for people to start throwing Jay Wright's name out there. It is a dance that we have all seen before, with most major coaching jobs that have opened over the last few years. Jay Wright is a commodity.

Should we take it seriously this time?

Unlike Kentucky, however, a move to College Park, Maryland would perhaps be an easier one for Jay's young family. Just a few hours away from friends and family, Maryland offers almost all of the same resources as Villanova, and boasts a program that generates enough revenue to ensure that those resources will never dry up. Meanwhile, Villanova is in a precarious position within an increasingly-unstable Big East conference.

Despite not generating nearly the same profits as Maryland, Villanova has committed more resources to it's basketball program -- spending around a million dollars more per year on the sport. Boosters have also shown a commitment to provide for Jay Wright's needs, most recently ponying up the cash to build him a brand new practice facility.

Not that there was anything to it. As of midday, Jeff Barker of the Baltimore Sun was reporting that Maryland officials have not reached out to Jay Wright. Sources close to Jay Wright's management told VUhoops that they hadn't heard anything about the Maryland situation as of this morning.

Jay Wright has not expressed any interest in the Maryland job so far, and while it is always possible for things to change, indications so far are that the coach intends to stay on the Main Line for now. Then again, if Maryland significantly ups it's basketball budget and coach's salary, things might get interesting.

(UPDATE 5/7): It looks like Sean Miller of Arizona will be taking the Maryland job.

(UPDATE 5/8): Jeff Goodman now states that Miller will be staying in Arizona.