Share All sharing options for: Week In Review (May 8)

Brian of VUHoops.com reported yesterday that Jay Wright is among the select few coaches targeted by the Terrapins athletic director, Kevin Anderson, to replace Williams. Andy Katz calls the Maryland job "one of the best in the country." But will that be enough to lure Jay Wright from Villanova? Katz writes, "Wright has built Nova into a Big East perennial power. He has recruiting locked up in the corridor. He has coached the Wildcats to the Final Four. And he is extremely comfortable in Philadelphia. If there is a next move for Wright, it's likely to the NBA. Wright doesn't need to jump to a basketball-football school. According to sources, Wright wouldn't leave Villanova for Maryland." That story was confirmed by Philly.com, which reported yesterday, "Wright isn't leaving Villanova. With a hat tip to Friartownmayor, we have confirmed that ESPN 980 Radio in Washington, D.C. reported today that former Arizonia and Xavier coach, Sean Miller, will accept the Maryland head coaching position on Monday.

Chambers Does Good: Jack McCluskey of ESPN reports that "in just his second season as the men's basketball coach at Boston University, Patrick Chambers helped bring about a remarkable turnaround that took the Terriers from middle of the pack to America East champions and to the NCAA tournament. As a result, Chambers signed an extension on Thursday that keeps him at BU through the 2015-16 season." Chambers had been an assistant coach for Jay Wright at Villanova. 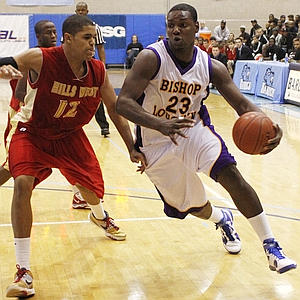 Pinkston's Future in Hands of Judge: Brian of VUHoops reported that suspended forward, JayVaughn Pinkston will be reinstated as a student in good-standing at Villanova on June 1, 2011 — the first day of the summer session. Philly.com reports that Pinkston will be part of a loaded freshman class that includes Achraf Yacoubou, Darrun Hilliard, Markus Kennedy and Tyrone Johnson. Pinkston’s return to the court, however, is dependent on the outcome of his upcoming trial on May 25 to face charges for off-court incident last November. The case will be heard by Montgomery County Common Pleas Judge Thomas C. Branca. What kind of Judge is Branca? RateTheCourts.com reports the following comments, presumably from those who faced Branca in the past: "You actually pay this joker 161,000? Boy you guys are pissing away my taxes!!!!!!" … "I have been treated as if I’m guilty since day one. Judge Branca fell asleep when I was on the stand." … "[Judge Branca’s] ruling included biased, derogatory, and unnecessarily personal, psychological observations that he was unqualified to make." … Able to look at facts and render decisions based on the law and the evidence provided. He was courteous and empathic--an important trait in a family court judge." 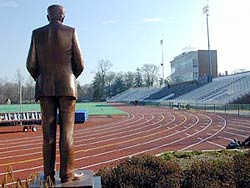 Villanova Hosts Big East Track Championships: Villanova.com reports that "for the third time in the last four years and the 22nd time in the 32-year history of the event the BIG EAST Outdoor Track & Field Championships come to Villanova Stadium this weekend, where the Wildcats will host 13 men's teams and 15 women's teams in the conference meet. Competition begins on Friday morning and runs through Sunday afternoon."

Big East Football: Brian Bennett of ESPN writes the following about the the prospects for a big TV contract for Big East football: "The Big East isn't coming close to matching the nearly $3 billion deal that the Pac-12 somehow managed to wrangle. There aren't three teams out there the Big East can reasonably attract who would add very much value from a national perspective. UCF, Villanova, Houston, East Carolina -- those teams aren't moving the needle for anyone.

More Bad News for Connecticut: ESPN reports that "Connecticut swingman Jamal Coombs-McDaniel, who was recently arrested on drug charges, plans to transfer from the national champion Huskies, the school said Thursday. His departure opens up a scholarship for Calhoun, who has already lost one due to NCAA recruiting violations and is expected to lose at least one more later this month when the program's Academic Performance Ratings are released."

'Nova LAX Fans Have Fingers Crossed: Villanova.com reports that the 10th-ranked Villanova Wildcats fell, 11-9, to the Georgetown Hoyas on Saturday evening, marking the end of the 2011 regular season for Villanova. 'Nova learns whether they earned an NCAA playoff birth tomorrow evening (May 8 at 9PM) when ESPNU televises the lacrosse version of Selection Sunday.

CBS Parts Company With Patron Saint: SI.com reports "that The patron saint of March Madness buzzer-beaters will not be calling the NCAA tournament next year. CBS Sports recently parted ways with Gus Johnson, a play-by-play mainstay on its college basketball coverage for 16 years, after the two sides could not agree on a new deal. Johnson has also worked as a play-by-play voice for the network's NFL coverage since 1998. Johnson's animated style and signature calls at the conclusion of tournament games earned him cult status among younger college basketball fans." Here's some of Johnson's signature calls on CBS:

Other News Posted on VUHoops This Week: