(Updated 5/17) It was announced back in February that Villanova's long-time linebackers coach and Special Teams Coordinator, Clint Wiley, would be leaving the program for the second time. Wiley did two stints on Andy Talley's staff, the first from 1998 until 2004 and again for the past five years. In between, he coached a high school program in southern New Jersey. His knowledge of the area was instrumental in Villanova's success in recruiting players from that region.

Defensive line coach and 2002 Villanova Alumnus, Billy Crocker, will move into Wiley's roles, taking over with the linebackers and running Special Teams for the 'Cats. The football staff is terming Crocker's new role a "change in responsibility" rather than a promotion, and there was no comment available from Crocker.

The open spot on the staff will be filled by Dave Sollazzo, who spent the last decade coaching the University of Maryland Terrapins defensive line. He will serve the same role at Villanova. Sollazzo was available after a coaching shake-up and Maryland ousted Ralph Friedgen and his staff in favor of ex-UConn coach, Randy Edsall. 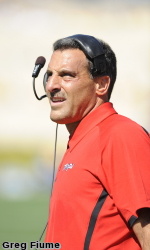 From a recruiting standpoint, Sollazzo will recruit New York and Northern New Jersey. Current defensive coordinator Mark Reardon will assume Wiley's recruiting duties in southern and central New Jersey in addition to the state of Delaware.

"Dave brings a great deal of experience to our staff," said Talley. "He is an outstanding recruiter with a tremendous reputation. I am very pleased we were able to add someone of Dave's caliber to the staff. He is a great addition to the Wildcat football program."

Sollazzo comes to Villanova from the University of Maryland where he served as defensive line coach for the past 10 seasons. He was also the Terrapin recruiting coordinator for the last five years. During his last four years at Maryland, the Terps signed 72 student-athletes ranked among the top 100 nationally at their positions, including 17 All-Americans.