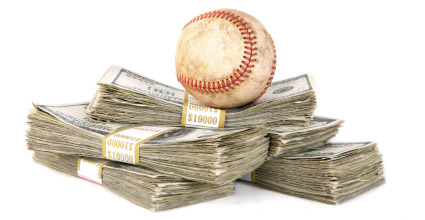 In 1890, there wasn't much money in playing a sport. Throughout the early history of professional sports, in fact, the salaries offered to athletes was rarely enough to place them among the wealthiest Americans. Even in Babe Ruth's era, where a ballplayer could be paid more than the President of the United States, most professional athletes still spent their offseason working other jobs, or barnstorming around this (or other) countries in search of additional income.

In 2010, income isn't a problem for professional athletes. The average salary of a professional baseball player is over $3 million(up from around $20,000 in 1970) and the minimum salary is well into six-figures.

The merits of professional athlete salaries are a topic for another day and another blog. However, with college athletes putting tremendous time and effort into their sports -- and with colleges earning tremendous dollar amounts from their efforts -- there has been a clamoring of late to pay those athletes above and beyond their scholarships.

While most students can spend (or borrow) sums up to six-figures to attend a four-year college, the scholarship athlete is relieved of much of that burden. In revenue sports, almost every player on a roster can be receiving a "full scholarship" for at least four years (and five or six even, if they redshirt or receive NCAA waivers). Those scholarships cover their tuition as well as room and board -- but they don't cover everything.

Scholarship athletes, many of whom could not afford to attend school without their sport, still have to pay the expenses of everyday life. They have to do laundry, buy toiletries like toothpaste, purchase clothes to wear off-the-court, pay for transportation to and from their homes on break, and any of a myriad other expenses -- none of which may be included in their scholarships.

Even worse? They can't really hold a job. The NCAA won't allow division 1 athletes to work during the school year, and summer employment is both scrutinized and difficult, given the 365-day nature of the workout and class schedule most of these kids endure.

The subject of offering a stipend to student athletes to cover those costs and alleviate the financial strain was apparently on the agenda at this week's Big Ten meetings.

With plenty of cash rolling in to the Big Ten schools from television revenue, it isn't far-fetched for them to lead a move toward that model. In fact, the BCS automatic qualifiers in general could likely, even if begrudgingly, afford a shift toward funding that model. Schools in smaller, lower-revenue conferences might struggle under the additional burden, however.

The A-10 entries in the Big 5 do not turn a profit on basketball and may not have the means to further expand their budgets to pay their athletes an additional stipend for their services. Penn likely could afford the stipend, but would be handcuffed in their ability to do so by Ivy League sensibilities that don't even allow athletic scholarships to be offered in the first place.

Villanova basketball, meanwhile, generates enough profit to pay players a reasonable stipend, but even that would reduce the subsidy that basketball profits currently provide to the rest of the athletics department.

The Big Ten is talking about offering about $2000 to $5000 per year to their athletes for expenses. For a basketball team, that adds up to $26-65 thousand dollars per year -- not a bank-breaker -- but what about football? An 85-scholarship player football team would cost well into the six-figures in stipends, and it wouldn't stop there. If you are paying stipends to revenue-sport athletes, you have to offer the same treatment to scholarship athletes in non-revenue sports as well.

What would happen if Butler University opted not to participate in the stipends on financial grounds? Could they still compete at all on the recruiting trail?

Schools in certain conferences (the ACC, Big 12, Big Ten, Big East, Pac-12 and SEC) would have little trouble providing a full cost of attendance scholarship to every athlete with a full, head-count scholarship. And it would be every one. Even though football and men's basketball pay for every other sport at most schools, giving bigger scholarship checks to only those players would inspire the mother of all class-action Title IX lawsuits. Lawyers probably would stage an arm-wrestling tournament to decide who gets to represent the class. Raising everyone's scholarship wouldn't be a problem for the power conferences, though. If Michigan's annual athletic scholarship expenditure rose from $15.5 million to $17.5 million, administrators could tweak a few other budget items and sail along.

The problem will come in the lower reaches of the FBS. In the Sun Belt and the WAC, the need to spend an additional million or two could cripple an athletic department. Most of those athletic departments rely heavily on taxpayer dollars or fat student fees to survive; if they start asking for more, their universities may decide athletics at that level aren't worth the trouble. One such school, Louisiana-Monroe, may already have reached its financial breaking point. In April, ULM students voted down a proposed $10-per-credit-hour athletics fee.

The implications of such a move could change the face of college athletics, but to get such a measure approved, the schools in favor of it would have to get the NCAA to pass legislation to that effect -- and it would likely require the approval of every Division 1 conference.

That is, unless the BCS conferences felt so strongly about the issue that they were willing to split from the NCAA (or Division 1) altogether.

There is also the matter of the slippery slope. Though there is no discussion of a true "salary" for student-athletes, stipends will be viewed by many as a step in that direction. They will even vary by school -- the cost of living in Los Angeles or New York is greater than the costs in Kentucky or North Carolina. Would those regional differences have an effect? Would UNC offer a stipend to match UCLA regardless of actual cost of living, so as to not miss out on a recruit who might be swayed by a bigger number?

Perhaps over-the-top, the slippery slope argument was made by SBNation Chicago:

Of course, the slippery slope is a logical fallacy, and while it may be fun to discuss that worst-case what-if, it is best to keep in mind that it is simply a speculative what-if scenario. It is perhaps just as likely that the NCAA would approve such stipends and carefully monitor their application to ensure that they remained a measure of cost-of-living, rather than a true salary.

Then again, who said that paying players a true salary would be such a bad thing?

Of course, none of this matters if the rapture comes on Saturday, right?