Share All sharing options for: Football: Coaches Split on Nova 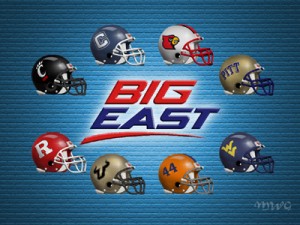 CBS Sports' Brett McMurphy caught up with the Big East (+TCU) football coaches who are down in Ponte Vedra Beach, Florida this week for the Big East meetings. The meetings are expected to cover a range of topics, and football expansion will almost certainly be one of them. Though the coaches will not be voting on future expansion or members and may not even be asked their opinion by their AD's and Presidents, it is certainly interesting to hear their thoughts.

Three of the eight football coaches had no opinion on whether Villanova should be the 10th football member. The remaining five were split -- McMurphy calls it 2.5 votes each way -- on the issue. The half-vote came from a coach who suggested that he would like Villanova on-board if it meant games would be played at Lincoln Financial Field, but not elsewhere (so, essentially a very-polite "no").

Overwhelmingly, the football coaches supported a move to 12 football members if Villanova in included. Only two coaches wanted to stay at 10. If Villanova does not join, the majority of coaches still hoped to add a 10th member, though three of them would stay at 9 members in that scenario.

TCU's vote was not tallied, but Gary Patterson went on the record saying that, "I like nine [members] for the simple reason you can play four non-conference games." He told McMurphy that the 9-team scenario was what they had in the Mountain West and it worked out well for them.

Someone should tell Patterson that the Big East is a BCS automatic qualifier -- a strong out-of-conference schedule isn't a must to get to a BCS Bowl.

Regardless, the coaches generally favored a 10-team league over 9-members and seemed to prefer 12-members over 10. Some had an opinion on who should be added, but there was no strong direction among them. Support for Villanova, UCF, ECU, Houston, SMU and Army was expressed.

That should be no surprise to VUhoops readers, of course. Since the addition of any school can provide inventory, the Big East needs to add schools that will help maximize the value of that inventory -- and that means' TV eyeballs.

Rutgers is unlikely to ever favor adding Villanova to the conference. As the state flagship university of New Jersey, they are located between the New York and Philadelphia markets and likely view both as being within their sphere of influence. The rest of the conference, however, will have to make an informed decision based on information available from the television networks and estimations of future value.

While that all might be discussed this week, don't expect any movement. The University Presidents, who ultimately make decisions regarding membership, aren't in Ponte Vedra Beach this week. That fact will prevent much movement from arising out of these meetings, even though significant progress could be made.