Share All sharing options for: PPL Park will Expand 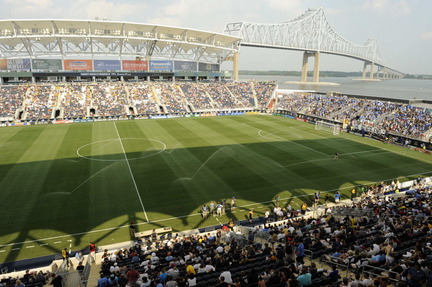 Philly.com reports that the Philadelphia Union is working on a three-phase plan to expand their PPL Park stadium to seat 27-30,000 fans. Their plans have little to do with Villanova's proposed football move to the Big East, however, and their motivation has been the near-sell out crowds they have been drawing to the Chester facility in their second season. They recently sold out of their planned season ticket allocation and started a waiting list.

Barring a change in plans, the Union would begin their first phase in 2014 and bring capacity up to around 20,000 seats. A second phase – the timing of which is still undetermined – would take capacity to 27,000, while a third and final phase would complete the original planned expansion to 30,000 seats.

According to Jeff L'Hote, a soccer consultant quoted by Philly.com:

"If the Union in their second season [are] at 90 percent-plus capacity," he said, "what happens when they bring in their Beckham equivalent? . . . All the signs for the sport in general, and MLS in particular, are continuing growth."

"If I'm the Union," he said, "I don't want to be backpedaling five years from now: 'Why didn't I start this process of expansion three years ago?' "

Though Villanova football is not the motive for expansion, this development at least demonstrates that the Union are interested and motivated to build out PPL Park to 30,000 seats for their own purposes. This means that any negotiation or discussions that Villanova is having or has had with regarding expansion have likely not faced as much push-back as many fans had feared. It also means that Villanova would not likely have to pay the entire cost of an expansion.

What this does not mean, however, is that Villanova is any closer to an FBS upgrade. The expansion of PPL Park that is being discussed today is to be done with or without Villanova football and on a time line that suits the Philadelphia Union, rather than the Big East.

We also cannot read into this that the Philadelphia Union will not be hosting Villanova football in the future. Expansion is a component of their business model going forward and the time line they have outlined so far is what they will likely pursue with or without Villanova. Prior comments by the Union CEO Nick Sakiewicz, indicated that they were willing to accelerate the expansion time tables should Villanova sign on as a tenant, and that option may still be on the table.

In the meantime, this news is indicative of the ability of the Philadelphia Union to draw fans to their stadium in Chester, and is a positive sign for any plans by Villanova to potentially play future football games at that venue.

The issue remains in the air for the 'Cats however, and has been described as a "delicate" one at the moment. Expansion of PPL Park was a criteria that has been publicly noted in the media, but there may be more than meets the eye to this situation.