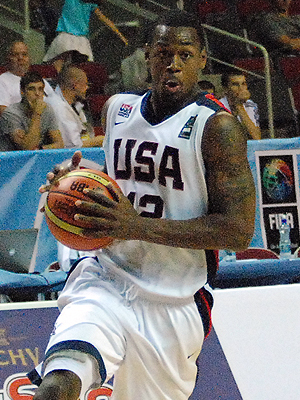 (Updated with video) Villanova’s James Bell was reported to be the last man chosen on Team USA’s U19 basketball team. Just making the team was a tremendous accomplishment after being overlooked as a McDonald's All-America and a long painful recovery from stress fractures in both legs last summer. However, his Cinderella story did not end when he made the team. Bell has distinguished himself with solid defense and few turnovers for Team USA, and has been rewarded by starting all four games on a team that is now 4-0.

Bell’s finest game came on our nation's 235th birthday, leading Team USA with a convincing win over Canada 83-54. Bell scored a team high 16 points in 20 minutes of play, shooting 6-9 from the field including 4-of-6 beyond the arc along with eight rebounds and no turnovers.

An excited James Bell said after the game, "We said going into the game that one of Team Canada’s flaws was transition defense, so we just tried to exploit it. We got stops and we got out running. But it started with the stop. We all buckled down on defense, got deflections, got rebounds and we just got out." About his breakout game offensively, Bell explained, "My teammates put me in the right positions. They made great passes, and I was just knocking down shots, it was just one of those days." When asked what it will take to beat next-up Lithuania, which destroyed Team USA in an exhibition game last week 108-75, Bell said, "We’ve come a long way. We know where we have to be to beat them. We know how we have to play to play with them. We just have to play our game; stay confident and just stay solid; no turnovers; limit their fast break points and just stay in the game."