Share All sharing options for: Nardi drops double-double in JSBL 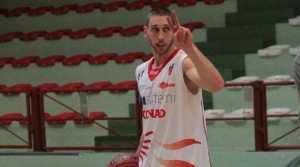 Mike Nardi scored 25 points, had 15 assists and grabbed 8 rebounds in a 135-140 double-overtime loss on Wednesday night. The former Villanova guard is playing point for the Investors Savings Bank squad in the Jersey Shore Basketball League (JSBL), a league that features division one players as well as professionals.

Investors Savings was taking on T&T Coast in the early game at St. Rose High School in Belmar, NJ. T&T was lead by Randall Stallworth, who scored 33 of his team's 140 points. It was the hustle of Romanian pro point guard, Jason Westrol that allowed T&T to climb back in to the game and take it into overtime, with the score tied at 121. He was fouled with 4.7 seconds left and purposely missed his second free-throw, grabbed his own rebound and hit a shot to tie to score at the end of regulation.

In the first overtime, Nardi hit two clutch free-throws near the end of the period to put his team up 130-128, but a long two-pointer as the clock ticked down sent them into overtime.

The game might have gone into a third overtime had Nardi drained a difficult three-pointer with his team down late in the period, but his miss and a subsequent foul allowed T&T to leave the gym victorious.

Cheek is enrolled in summer school classes and his class schedule may not permit him to travel from Radnor Township, Pennsylvania to Belmar, New Jersey on most weeknights.

Nardi also scored 34 points in a JBSL game last week to lead his team and the game in scoring. In addition to the points, he also recorded 10 assists and four steals for Investors Savings against the Stevens Gutter Cleaning team that is comprised almost exclusively of players from Rutgers (one player is from Stonehill College).

In other Mike Nardi news, the Italian media is reporting that Nardi and his agent had been actively discussing contract terms with the Italian Lega Due team, FulgorLibertas, over the holiday weekend. On Wednesday, that team announced that they had reached terms with Nardi to bring him back for another season.

The exact terms of the deal are not known.