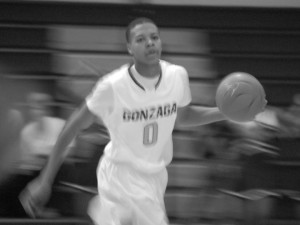 In order to save our reader, Barney, a little bit of time today, we decided to compile some snippets of news from the now-wide-open July "live" period. During July, coaches can travel to tournaments and camps around the country to see prospects in action and speak to them in person about their programs. Jay Wright opened the live period with a trip to Indianapolis, and he and his assistants will spend much of the month on the road (though both Jay and top assistant Billy Lange will be in New Jersey tomorrow for the Randy Foye Foundation Night for Newark).

Nate Britt, a highly-rated point guard in the 2013 class, told Josh Barr of the Washington Post that the three schools recruiting him the hardest were Villanova, Georgetown and UVA. He was at the Adidas Invitational this week in Indianapolis, where Wright had an opportunity to recruit him in person. There had been some discussion of Britt as the top point guard in his class after NBAPA camp, but according to Jeff Borzello that may have dissipated:

Nate Britt had his moments where he was unstoppable, but he was outplayed by the Harrison twins. Still, when his jumper is falling, he’s very difficult to contain.

DaJuan Coleman, a 6'9" rising senior was at the LeBron Camp all week, where Maalik Wayns is serving as a counselor. The top-5 center in 2011 was asked about his college decision and mentioned to Adam Zagoria:

Though Syracuse and Kentucky are considered the frontrunners for Coleman, he lists a number of schools that he is considering, including Ohio State, UConn, North Carolina, Villanova, Arizona, Texas, Kansas and Florida.

In other words: he likes Jay Wright (who doesn't?), but don't hold your breath.

Ja'Quan Newton is a 2014 point guard out of Neumann-Goretti, who lists Villanova along with a number of schools from the Big East, ACC, Big Ten and Big XII as showing interest. His top-3 schools are currently "Syracuse, Rutgers and Villanova." On Villanova, he told NBE Basketball:

"Villanova, I like Jay Wright and how he coaches his team," he said. "Maalik Wayns had a play where something went wrong, he took him out to talk to him and put him back in. "

What Villanova may be most desperate for these days is a few good shooters, and 6'5" Reggie Cameron from the 2013 class, might be able to help the 'Cats in that regard. The pure shooter attends Hudson Catholic High School in New Jersey and travels with the NJ Playaz AAU team. NBE Basketball reports:

"And I’ve recently picked up offers from Villanova, Cincinnati, Seton Hall, Rutgers, and Providence, DePaul, Xavier and Northwestern."Although only in the Class of 2013 and a ways from scheduling official visits, one school stands out and he would definitely like to eventually make it one of his five official visits.

Villanova is a great school. It is about an hour and a half from my house," said Cameron.

Shep Garner, a 6'1" combo guard from Philadelphia's Roman Catholic, is among the top recruits from the Philadelphia area in the 2014 class. Schools cannot yet call him directly, but Villanova, Georgetown, Florida and Pittsburgh have all spoken with his parents.

Garner envisions himself playing point guard at the college level, and while he told NBE that "location is not a factor," he previously told Rob Dauster that he wanted to "get away from home." That factor may make landing the super-athletic guard a difficult task for the Wildcats.

On the Football front, we previously told you about the early verbal commitments of 2012 prospects, Austin Calitro, Nico D'Angelo and Jake Prus. Since then, the 'Cats have picked up two more verbal commitments.

Mark Clements is a defensive back from Oakcrest High School in South Jersey. He is 5'10", 175lbs and expected to play safety for the Wildcats. As a junior, he had seven interceptions and 34.5 tackles on defense as well as 10 receptions for 108 yards and two touchdowns as a wideout. He also had offers from Fordham and New Hampshire.

Stacey Bedell is a 5'9" and 175lb running back from Mastic Beach, NY. He recently impressed coaches when he showed up at Villanova camp with an injured ankle, but not only ran the 40-yard dash, he did it in 4.4 seconds. He had offers from a number of high-level FCS schools as well as from Army. He chose Villanova because, apparently, he was told that a move to I-A football is imminent, and he wants to prove he can play at that level.

Sadly, Brandon Arcidiacono, the #7-ranked Center in his class, who listed Villanova among his finalists with West Virginia, Connecticut and Boston College announced that he would play football at Rutgers in 2012. Brandon is the cousin of Villanova hoops commit, Ryan Arcidiacono, and it was thought that his family ties to the Main Line school might have given the 'Cats a chance to upset BCS competition on the recruiting trail.