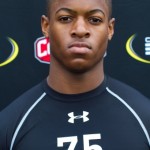 According to Keith Pompey of the Philadelphia Inquirer, Souderton High School running back Javon White is the sixth football player to give a verbal commitment to play football for Andy Talley in the 2012 class. He notified the staff of his commitment earlier today.

White is another speedy tailback in the Class of 2012 who will join Stacey Bedell in setting the Villanova backfield on fire. According to Pompey:

The 5-foot-10, 195-pound speedster rushed for 825 yards and nine touchdowns in a limited role last season. He, however, covered the 40-yard dash in 4.3 seconds in a recent one-day camp at Villanova.

White previously attended the Nike SPARQ combine at the Eagles' NovaCare Complex in February, where he recorded the top vertical of the 860 participants and made the 25-man "All-Combine Team."

He comes with a good football gene-pool too, his uncle, Michael White, played football at Arizona State.

"I went to their camp and they asked me back for another day and then they offered me a scholarship," White told PhillyBurbs.com. "It’s a good school academically, it’s close to home and they have good football."