Villanova Alumnus, Randy Foye, will be hosting a summer basketball league at First Street Park in Newark for the remainder of the summer. His co-hosts for the outdoor league will be the friends he grew up with.

The league will play three games every Friday, from July 15, until September 9, with the first games tipping off at 6pm. The league will be fun for both participants and spectators and will feature music by DJ Wallah.

Foye hopes that his league will support a positive movement in the neighborhood by promoting family-friendly fun in the park. 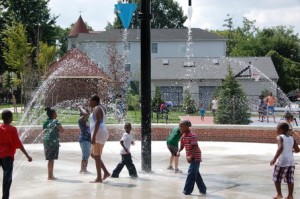 The City of Newark recently renovated the park in 2009,transforming it into an enhanced green space with energy-efficient lighting, walkways, landscaping, brick piers, and a decorative fence. New basketball courts, playground equipment bike racks and sprinklers were installed at that time.

The park is located at the corner of First and Third Streets in Newark, New Jersey, abutting the larger Branch Brook Park. This is not far from the downtown Newark area and is as safe as any neighborhood in Philadelphia.