I realize we are about two months late with this video. Our friends at the Hoop Group never tipped us off about the interview and we had to find it through that other Villanova blog. We can't be the first one on the scene of every Villanova happening, of course, but that doesn't stop us from trying. 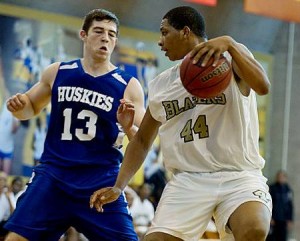 Jordan Washington is a 2013 big man out of New York, who plays for the same New Heights AAU team that JayVaughn Pinkston came from. He is a 6'7" power forward who was recently rated the top prospect out of New York in the 2013 class. He is currently rated 4-stars by both ESPN and Scout.com, as well as being one of the top-10 players in the nation at his position on both sites.

He has good size at his position and is able to hold his ground in the paint. He grabs a ton of rebounds and has plenty of scoring touch as well. He told the HoopGroup's Dave Krupinski that he is trying to get in shape to be able to run the floor better and play a more up-tempo game.

More importantly, however, he notes in the video that he will "probably go to Villanova." Things change in a heartbeat when it comes to recruiting, of course, but Washington is a big time recruit who may be leaning toward the Main Line.