Share All sharing options for: Villanova Football on Television 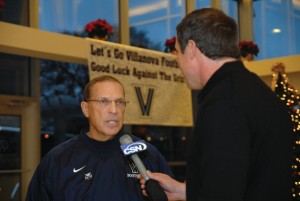 The CAA conference announced a 28-game television schedule at the CAA Conference football media day. Including 19 games that will be on the Comcast Sports Group regional networks. The conference continues to have the nation's most-watched Football Championship Subdivision television package.

In addition to Comcast, a number of games will be carried on ESPN3.com and the CBS Sports Network (formerly CBS College Sports Network).

Villanova will have four games carried as part of the CAA package: