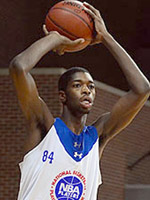 One of the top Philadelphia-area basketball prospects in the 2012 class, Amile Jefferson, is fast approaching the beginning of his final year of high school. While many members of his class have already made their college decisions and are awaiting the early signing period to make them official, Jefferson's list of schools continues to expand.

Lately, the talented big man has added Alabama and St. John's to his list of suitors. Though a rumor had his list narrowed down to eight schools, he recently busted that rumor by stating that his recruitment was still "wide open." He will plan to take some visits, however, in the coming weeks or months in order to bring himself closer to making a decision.

Jefferson told NBE Basketball, "We’re hoping to get a visit to NC State and while we’re down there maybe visit Wake Forest. Get up to Maryland. Hopefully get up to Pitt. And right now that’s pretty much it. Maybe get a visit in to Ohio State as well."

He has also been a sought after option for Villanova, and the three current 2012 verbal commitments for Villanova, Daniel Ochefu, Savon Goodman and Ryan Arcidiacono, are all trying to get the local star to join them on the Main Line.

While the draw of those three Philly kids might be strong, Jefferson also has friends heading elsewhere. In particular, he told NBE that he is good friends with incoming St. John's freshman, Nurideen Lindsay:

Though Steve Lavin has thrown his hat in the ring, it has been NC State and Illinois recruiting Jefferson the hardest -- that is, unless you include the calls from his friends to join them in New York or Philadelphia.

"Those guys have been my friends for a while. We played in the same league for a long time, so when we make a decision they’ll definitely have some influence, but I still have to make the decision for myself. But I would love to play with those guys. Each and every one of them I have become close friends with."

Jefferson would likely play the 4 at Villanova, though some schools view him as a viable option at the 3 as well.