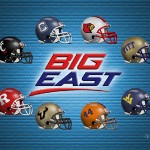 It was announced this morning by the Big East flacks that commissioner Marinatto would take the podium and speak to the assembled reporters about a number of topics -- expansion included. The remarks to that end, however, didn't have much more substance than the announcement itself. The Big East will expand, but Marinatto can't tell you when, or with whom.

Expansion has been a hot-button issue for the Big East over the past year. Last summer, many believed that the conference would be picked apart by the Big Ten or another conference as the "big boys" moved toward becoming over-sized mega-conferences. That fear never came to fruition, however, and the Big East instead opted to pursue an expansion of it's own; approving a move to 10 football-playing members last fall, and lining up the addition of TCU shortly after.

Expansion isn't done for the Big East, but the delays and lack of information being put out there by the conference portrays an image of a league in disarray. There is no consensus for how to proceed. Unlike the Big Ten, who undertook extensive studies, found a consensus, and ultimately made a rather quick move to 12 members by adding Nebraska, the Big East has shown far less competence throughout this process.

That includes the very public courting of Villanova football last fall, which resulted in a public relations nightmare in April, when the football schools found themselves in a stalemate over the Wildcats' admission to the football league.

According to Paul Zeise of the Pittsburgh Post-Gazette:

But here is the other issue facing the league -- not only can the members not agree on what the league should look like in terms of numbers (i.e. two seperate leagues, one 12-team league, one 16-team league with 12 football members, one 12-team football league with 20 basketball teams or leave it as it is) few teams can agree on which teams would add something and which teams to add. The top criteria seems simple as it was explained to me - "who, like TCU, will make us BETTER." It is not just about adding numbers, it is about finding teams that make the league better and that isn't easy right now.....

The Big East football conference is currently a marriage-of-convenience for the members. Together they form a conference strong enough to possess a BCS automatic qualifier, but apart they might just be very good non-AQ programs. That special status within the BCS is the glue that holds the conference together -- were they to lose it, the whole thing might come crumbling down in short order.

Even with a poor showing like the 2010 football season, however, the Big East will not be in danger of losing that AQ-status on the football field. The real key to maintaining the status revolves around money -- power conference schools generate large amounts of revenue, and for the most part, Big East schools are capable of keeping up, in every area except one: Television. The basketball side of the league is worth a lot of television money, and may actually be undervalued in the current primary-rights deal with ESPN. The football side, however, has what is easily the worst television contract among the power-six conferences. Remedying that should be the football school's goal with expansion.

One of the unsubstantiated rumors that has been floating out there is that ESPN asked the Big East to add a football presence in the Philadelphia market. Nobody has confirmed that rumor, but it certainly fits with earlier reports that Villanova would add more television value (even if only slightly) than other commonly-mentioned expansion candidates.

The two primary factors in conference television value are inventory and ratings -- the more games you play relative to the number of members (i.e. a 9-game schedule is better than 7- or 8-games) and the more eyeballs watching those games, the more money you can pry from the TV networks' bank accounts. Ratings are a complex projection, however, especially when you are discussing a contract that could last for 10 or 12 years. Over that term, the potential future value of an addition has an obviously-strong bearing on negotiations.

Kristi Dosh of BusinessOfCollegeSports.com and Forbes.com touches on the ratings aspect while trying to explain to readers why TCU and Utah are moving up to power conferences while Boise State is still on the outside looking in.

In my opinion, television is the number one reason TCU and Utah are moving to automatic-qualifying conferences and Boise State is not. TCU brings the 5th largest media market, and Utah the 31st. Boise State? Well, its media market ranks #120.

Dosh also notes that other factors are considered, including academics, new recruiting territories, and "institutional philosophy," but all of those are really secondary or tertiary concerns to the All Mighty Dollar. What isn't a factor in the equation?

Things could change for Boise State, however, as they build their brand nationally. Nebraska's television market is hardly a world-beater, but after decades of success, they count millions of Americans in their fanbase (including at least one Supreme Court Justice from Georgia). While the TV screens lighting up in the Cornhusker state may not be worth much to the Big Ten network, the households spread across the country who will now subscribe in order to watch the Huskers play for obnoxiously-named rivalry trophies has big time value.

Villanova hired a firm to study a football program upgrade, to analyze possibilities and crunch numbers to arrive at a resolution. Why doesn't the Big East do the same? Today's speech by Marinatto barely touched on expansion, saying just that the expansion process is "ongoing" and the league will continue to study all options. He later went on to comment that a conference championship game (requiring 12 football members) was a possibility and that holding that game in New York would be "phenomenal."

Expansion to 12 members without a conference split-up seems more and more unlikely as the roster of schools expands past 17 to perhaps 18, 19 or 20 members. Despite that, Marinatto claims that there is "no timetable" on giving a final decision on Villanova football.

Is Pitt "leading" the Charge?

According to Zeise' blog post (linked above), " The group, led by Pitt, made sure this idea [adding Villanova football] was dead on arrival because this would add nothing to the conference other than add another mouth to feed from the same size money pot."

A source within the football program at one of the reported objectors, however, expressed a belief that Villanova's football program would become a competitive member of the Big East quicker than UConn did. The source noted that Villanova's combination of location, academics and coaching stability would make it easy to recruit talented players. Of course, that belief was premised on the construction of competitive facilities for training.

The case for adding UCF to the conference seems to boil down to the following factors: (1) Orlando is a top-20 media market; (2) they could have a rivalry with USF; (3) they're kind of good at football; and (4) Florida has lots of recruits. All things considered, those aren't bad arguments, but they aren't rock-solid either.

Orlando is a top-20 media market, but like Philadelphia, the college football obsession there is not the local guys, but rather the state flagship schools. Florida and Florida State rule and schools like UCF, though large, have a fanbase that grew up rooting for the Gators or Seminoles, and that is a tough habit to break.

When that is taken under consideration, UCF still has a few true advantages over Villanova. For one, they are already an FBS program, which means that they can join the Big East as fast as they can get out of Conference USA. Another factor is Florida, a market that is rich in football talent that Big East schools might crave. The final advantage is that they have an on-campus stadium on par with the Big East schools -- at least in number of seats.

What about Villanova? Well the Wildcats have done a tremendous job in the past decade of penetrating the Philadelphia market in hoops. College basketball took a downturn in the City of Brotherly Love when the Big 5 stumbled and the round-robin was suspended for a while. Villanova was hardly popular after that and was often blamed for killing the Big 5. Under Jay Wright, however, the 'Cats have slowly rebuilt the Philadelphia market and have outdrawn the local NBA team at the Wells Fargo Center in recent years.

Though it may well be impossible to end Philadelphia's love affair with Penn State football, if Villanova were able to work it's magic on the city's gridiron fans even just a little, it might not matter that the fifth-largest city in America is a "pro-town."

Villanova has the best and biggest market of the available expansion candidates. Philadelphia is the fifth largest city and the fourth largest television market in the country -- bigger than TCU's Dallas market. Like UCF, Villanova would have football rivalries in the Big East. Though the 'Cats haven't played a regular football series with a Big East member in a long time (if ever), the basketball rivalries can and will translate to other sports -- we saw that this spring when a large crowd came to Villanova Stadium for a lacrosse game against Syracuse.

The 2009 National Champions for FCS football can hardly be said to be operating an unsuccessful program either.

Rivalries aren't the only thing that should translate from basketball though. Villanova has a "brand." Unlike smaller FBS schools, Villanova's inclusion in the Big East conference almost from inception and national prominence in basketball has built an athletics brand that makes the school instantly recognizable. People who aren't necessarily fans know what Villanova basketball is, they talk about it and they tune in to watch the games on ESPN and CBS.

No expansion candidate from Conference USA has a brand, in any sport, that matches what Villanova has built in basketball.

No school involved is a slam-dunk for the Big East. There are a few schools that can probably bring something to the table. Villanova, UCF and perhaps Houston are among them. Army and Navy as football-only members would be controversial additions, but likely also valuable (though it is unlikely that they are interested).

The fact that none of those options stands out tremendously is perhaps why the Big East is struggling to make an expansion decision. Then again, if the Big East plans to move to 12 football members like Pitt A.D. Steve Pederson would like, the decision seems much easier.