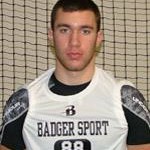 According to LLLeagueSports.com, Michael Burke IV, a star wide receiver from Columbia High School in Pennsylvania is the latest member of the class of 2012 to accept a scholarship offer to play football at Villanova. The 6'3" and 196-pound senior had 72 catched for 1,185 yards and 16 touchdowns as a junior and had garnered some serious attention from participation in the 7-on-7 elite series in the summers.

Burke had been hearing from coaches at Albany, Akron, Boston College, Bowling Green, The Citadel, UConn, Delaware, Maine, Monmouth, SMU and West Virginia – among others. Villanova offered him after he attended camp on the Main Line this summer and on Monday morning, he visited with Coach Talley to deliver his verbal commitment in-person.

"It’s been a very, very busy time," said Burke IV, the reigning Lancaster-Lebanon League Section 3 Wide Receiver of the Year. "During the process it was very stressful. But I can enjoy it now."

Burke apparently hit it off with wide receivers coach and recruiting coordinator, Brian Flinn, while at camp. ESPN.com rates him one-star with an overall rating of 67, describing him as a "pretty good" possession receiver.

He also plays basketball and baseball.

Additionally, according to LLLeagueSports.com's story:

Villanova is waiting to hear from the NCAA about a possible jump to the Big East – and a bump up from FCS to the Football Bowl Subdivision.

"I would love for that to happen," Burke IV said. "But either way I just want to contribute to Villanova."

Burke IV said that Villanova should learn its fate by the end of the summer, and that if the Wildcats do indeed jump to the Big East, his entire recruiting class would be redshirted. If Villanova remains in the Colonial Athletic Association, Burke IV likely could play right away.

(h/t to theNovaBlog for spotting the report)