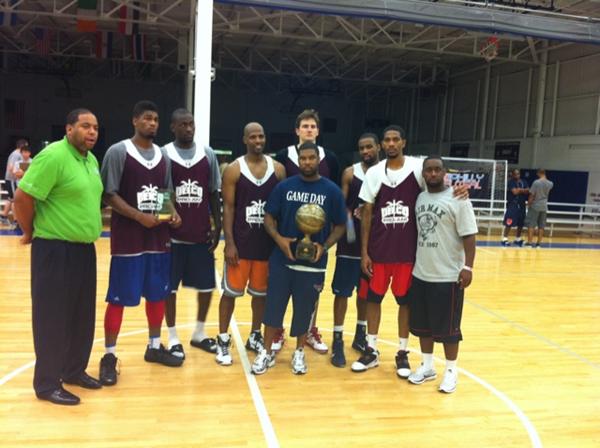 Mike Nardi wasn't the only Villanova Alumnus involved in a summer league. Antonio Pena and Reggie Redding, looking to face some live competition before jetting to Europe to join their pro- teams, joined forces for Omega Medical in the Delco Pro-Am league. On Sunday night, those two, along with former teammate and Villanova graduate assistant, Frank Tchuisi, battled T.Y.G.T.A.L. to a 62-61 victory to take home the league title.

T.Y.G.T.A.L. led almost the entire game before Omega Medical made a furious comeback in the final minutes to take the lead. With the game knotted at 56 with just over a minute left, Redding made a nice pass to Pena for a layup and-1. Redding then nearly gave the game away. He was stripped in the backcourt by Collins, who converted a layup to tie the game up. But Pena’s [3-point] jumper sealed the deal to win the title.

Pena apparently put on a show all summer, showing off some outside shooting ability that he rarely exhibited in college, including that corner-3. 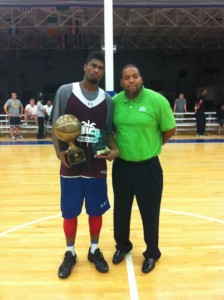 For his efforts in the title game, which included 22 points and 7 rebounds to go with that game winning triple, Pena was given the MVP award. Redding, who had the assist on that game-winner, had 12 points, 10 assists and 8 rebounds of his own.

Redding will leave for Germany later this week to play for the Walter Tigers Tuebingen, which is not nearly as long a trip as he made last fall to play in Cyprus (his team won the championship). Pena will be leaving for Spain where he will join UB La Palma, which is actually based in the Canary Islands off the coast of Africa, in the Spanish second division.

As for Frank Tchuisi? Well, he was back at work on Monday morning, as a Financial Analyst at an insurance underwriter in the Philadelphia area. He was the "-Am" in their Pro-Am team.

After a few years of playing abroad in France, Belgium, Germany and Greece, Curtis Sumpter told the Philadelphia Inquirer that he was ready to take another run at the NBA. Sumpter previously played for the Denver Nuggets' summer league team after college and even went to camp with the Los Angeles Clippers, but didn't make the roster with either team.

He now feels like the D-League might be a good opportunity for him to show off what he can do.

"I want to do the 'D' league," Sumpter said of getting a spot on a team in the NBA's Developmental League. "I haven't done that. I know guys who left Europe and went to the 'D' league and got good opportunities."