After yesterday's win over Israel, the 'Cats came out to a 7-6 lead in the first three minutes and ended the first quarter ahead, but the Dutch took over a few minutes into the second quarter and never again ceded control, winning the game, 75-63.

The 'Cats finished the first quarter ahead by a point but could not pull any further away. A strong and balanced Dutch offense, with four players in double-digits, was too much for the college players to handle.

Despite the Dutch size up front, Villanova's Mouph Yarou still managed to put on the most impressive performance of the game, scoring 15 points and grabbing 9 boards. Maalik Wayns also scored 15 points for the 'Cats, but did not shoot a high percentage from the field. No other player cracked into double-digits on the scoreboard, though with 9 points, sophomore James Bell was close. 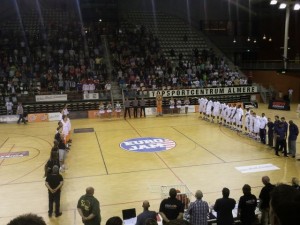 The 'Cats entered the half down six to the Orange, 35-41, which was an impressive feat given their 46.2% shooting from the field and abysmal 25% from beyond the arc in the first half. The 'Cats were also beaten on the glass, with the Dutch men having a slight advantage of one rebound.

The second half was all Orange, as their 2-3 zone must have made that tiny Dutch gym seem like the Carrier Dome. They would outscore the 'Cats 21-8 in the third quarter, including a 7-0 run powered by a pair of triples from guard Rogier Jansen to open the period. That run that would carry over into the fourth quarter to expand their lead from a respectable deficit into a full-on blow-out.

"We couldn’t score in the third and it wasn’t just that – we were turning the ball over and giving up easy baskets," Jay Wright noted in a statement. "Actually, we probably played as well defensively as we have on this trip.

"Their defense, though, was tremendous. They were too good of a team for us to turn them over. Mouph and Markus did a great job of battling their big guys. Our guards just could not get us into offense and you have to give their guards credit because they trapped and pressured the ball extremely well."

"They came out in the second half and really picked up the defensive pressure. I thought we may have been a little tired on our fourth game in five nights but they were good. Darrun Hilliard is a freshman in that situation and it was tough for him at times, but he’s had some great games for us. I also thought we came back and played well in the fourth quarter but that run was too tough for us to overcome."

There were a ton of turnovers on both sides, with the teams combining for 45 overall in the game, and 20 (10 each) in the third period alone. The Wildcats were charged with 23 turnovers altogether.

They had one assist, recorded by Markus Kennedy. The Dutch, meanwhile, recorded 11 assists on their road to 75 points.

The Netherlands never let up the gas, however, shooting a three as time expired, despite their comfortable lead.

They were lead by Robin Smeulders with 18 points, as well as Rogier Jansen who added 13 and NBA player Dan Gadzuric (Nets), who scored 12. Gadzuric picked up three fouls in the first half while guarding Maalik Wayns. The Netherland's other NBA talent, Francisco Elson (Jazz) did not play for the Dutch, for reasons that were not made clear.

"This was very valuable for us – playing against experienced guys in front of their home crowd," Wright noted. "I think what young guys learn playing in the BIG EAST is how physical the games are. Our young guys are learning this before we get to the BIG EAST. Our older guys already understand that and they’re learning how to pull the young guys along."

Villanova closes out its European exhibition slate on Sunday at 9:00 a.m. (against Georgia. 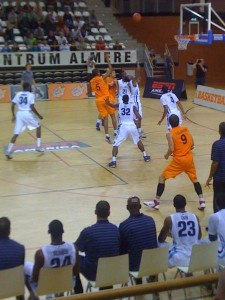 Wildcats take on the Dutch in Amsterdam