What are they telling recruits?

Share All sharing options for: What are they telling recruits? 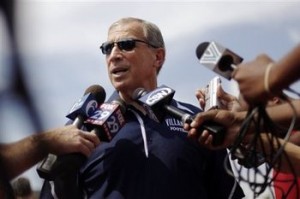 We've been wondering what the Villanova football staff has been telling recruits about the potential move to the Big East conference since some recruits began talking about a potential move this summer. Then again, Temple and UCF recruits have been saying essentially the same things.

For Villanova, the speculation started with 2012 running back Stacey Bedell, who told Scout.com, "they’re going into the Big East next year which is exciting." Receiver Michael Burke IV, lated told the reporter that Villanova should learn its fate by the end of the summer, and that if the Wildcats do indeed jump to the Big East, his entire recruiting class would be redshirted.

Most recently, defensive end Bryan Osei told the Philadelphia Inquirer when he committed that, "it looks like the team will wind up playing in the Big East. That’s exciting to me."

Members of the coaching staff have refused to comment on the Big East issue to VUhoops, but Andy Talley clarified a little about what he's been saying to recruits:

"It's the first question every recruit asks," Talley said Monday as his team readied for practice with his 27th season as Nova's head coach approaching. "I simply tell them that we as a university have studied it very well. We made a commitment to do it. The Big East is in a holding pattern right now. I'm not totally sure what's going to happen, but we're pretty excited about the opportunity.

"In terms of affecting our recruiting, it has been difficult because a lot of players want to know if you're going to be in the Big East," he added. "That would determine whether or not they come to Villanova or go to another Big East school. It's made our recruiting extremely competitive."