In a bombshell announced by CBS's Jeff Goodman, rising junior and Captain Isaiah Armwood will be leaving the Villanova basketball program.

Goodman goes on to surmise that the Maryland native could end up at Virginia, George Washington, Maryland, Iowa, or Texas Tech. New York Daily News basketball commentator, Dick "Hoops" Weiss believes that GW is the junior's most likely landing spot, but UVa reportedly contacted the newly-available big man today. Armwood told the Baltimore Sun that he would pick a new school in the next couple of weeks. 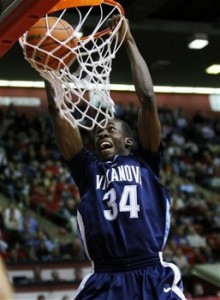 According to Goodman, Wright and Armwood talked "at the end of the trip to France and the Netherlands and the two, days later, came to an agreement that it would be best for Armwood to go elsewhere." In the 3 games at the EuroJam, Armwood started and averaged about 15 minutes per game and scored 2 points and 1.7rebounds.

In 61 career games at Villanova, Armwood averaged 2.4 points per game and 2.7 rebounds and 8 starts.

"I love Villanova - the school and the team - but I want to find a program that fits my style of play better," Armwood told Villanova.com.

"Isaiah is a great young man," according to head coach Jay Wright. "His hard work and commitment to the values of our program made him a leader of our team. We'll miss him but the most important thing is his happiness and we support him in his quest to find a new home."

As many Villanova fans are aware, Head Coach Jay Wright had a strong inclination to red-shirt Armwood during his freshman year of 2009-10, but alleged pressure from Armwood's family nixed that. Additionally the introduction of freshman big man Markus Kennedy and versatile JayVaughn Pinkston could possibly see a reduced role for 'Zeek in the 2011-12 season.

Though Jay Wright had initially intended to use Pinkston primarily at the Small Forward position as well as at guard, the coach has stated previously that he believes his redshirt freshman can play Power Forward as well, making him the likely favorite to take Armwood's place as the starter this season. Pinkston is also a player who has worked hard to develop his dribble and perimeter game and will likely try to showcase that development. Markus Kennedy and Maurice Sutton should also see some time at the 4.

This move decreases the depth and height of the Villanova rotation, a factor that may have contributed to the decision to utilize the "burn" offense last season.