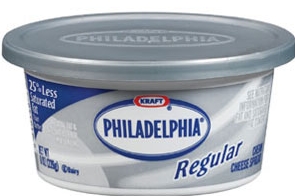 Big East athletes, many of whom hail from the New York area, may finally be able to get a proper schmear on their bagel. Under current NCAA rules, a Division 1 institution may provide free bagels for their student athletes' consumption, but to offer cream cheese is a mortal sin. The Big East, however, has proposed to amend the bagel rule, and if it passes, Villanova's recruits will finally be able to spread some Philadelphia on their breakfast.

This all stems from a rule that went into effect in the 2009-10 school year, allowing institutions "to provide fruit, nuts and bagels to student-athletes at any time." What that rule didn't permit, at least expressly, was for the student athletes to be allowed a free serving of cream cheese, butter, peanut butter or jelly to apply to their gratis circle of dough.

The Big East conference, with all it's New York influence, has opted to promote this rule change because:

The rule change, which will be considered and voted on by an NCAA committee in January, likely after considerable debate, would correct a grave injustice that has otherwise forced coddled student athletes to go dry-mouthed at the training table.

For what it is worth, however, the Big East does not believe that this rule change will have an impact on athletes' time. Apparently believing that the time spent in the process of choosing and spreading a condiment are not significant. That may be an error on the part of the conference in considering the indecisive nature of the modern athlete.

For those of us who might lose sleep over the potential of a slippery-slope to Miami-style debauchery that might stem from the additional expenditure on these frivolities, the proposed rule notes that the economic impact, "Will vary by amounts and types of spreads provided."

Now that we know that the Big East is in the pocket of the Philadelphia Cream Cheese-lobby, what does all of this mean for Villanova football's chances at joining the conference?