The Rise of Yarou

Share All sharing options for: The Rise of Yarou 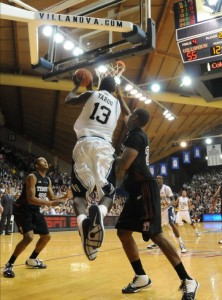 The talk at Villanova is always about the guards. Jay Wright likes to trust his point guard to take the reins and become the star of his offense. He preaches from the pulpit of the church of the scoring point guard, at least in recent years. In 2011-12, however, it seems that his center may truly become the focal point of the team for the first time of his tenure on the Main Line.

According to Jay Wright, and the stat sheets that back him up, Yarou was very impressive in Europe.

"Mouph went up against men and pros [Zaza Pachulia and Dan Gadzuric] and battled and really kept his composure. He was awesome." Wright glowed to Jeff Goodman. "I think the lowest rebounding game he had was 12. He played like a beast and was our best player on the trip. "

Yarou has come a long way from the freshman who was thrown into Big East games after missing almost all of the non-conference schedule, to a big man who seems ready to take on the challenge of being the man. Combine that with a team whose only other real returning starter is Maalik Wayns, and the 'Cats will need Yarou to be a bigger part of the team.

Wayns was doubled, trapped and pressed in Europe and he can expect more of the same this season unless the 'Cats can find other options to take some of the pressure away. Yarou seems poised to be one of those options.

He scored points in Europe, averaging 14 per game, and he was the second-leading scorer in the 'Cats only win on the trip -- scoring 22 points against Israel. He wasn't second to Wayns, however, as the junior floor-general scored a healthy 17 points to finish third on the team. In the 'Cats' only victory, the stars were Yarou and Dominic Cheek.

Yarou also rebounds, and despite often having to battle professional players with plenty of athleticism to match his own in Europe, he worked the boards exceedingly well. In the five European games, Yarou averaged 11.6 rebounds and only had one game where he didn't have at least 10 (a 9 rebound performance against Netherlands). Those numbers would be impressive in the college game, but the fact that he could grab 12 boards while battling Atlanta Hawks' center Zaza Pachulia? Outstanding.

This is Yarou's season. Dominic Cheek showed some signs that he might break out as well, but the man from Benin is not just showing signs, he is smashing everything in his path.

Villanova needs to find a new-look this season, one that gets the ball out of the hands of the point guard and into the post.