The Week In Review (August 20)

Share All sharing options for: The Week In Review (August 20) 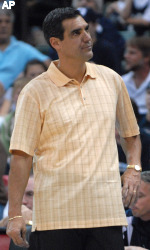 What I learned on my Summer Vacation (Jay Wright) .... Jeff Goodman of CBSSports.com got some great observations from Jay Wright recapping ‘Nova’s European trip. Mr. Goodman pens, "What Wright learned: "We have good leadership (he singled out junior Mouph Yarou) and the freshman really buy into playing Villanova basketball. Everyone's excited about the chemistry of this group and how they are committed to winning." What or who impressed him: "Mouph went up against men and pros (he went up against Zaza Pachulia and Dan Gadzuric on the trip) and battled and really kept his composure. He was awesome. I think the lowest rebounding game he had was 12. He played like a beast and was our best player on the trip." What concerned him: "Youth in the backcourt. We have Maalik Wayns, but we don't really have another guard whose competed in the Big East as a starter." Wright said that Wayns was solid, but the opposing teams trapped and pressed him every opportunity they got. "They doubled him, so it was tough for him - he didn't get to go off like he could." Darrun Hilliard did a good job," Wright said. "He really knows how to play and makes everyone better." Look for Hilliard to get in the rotation because he brings that aspect to the table - which isn't a strength of the other guards. Markus Kennedy and JayVaughn Pinkston are both are ready to play this season. "Both of them were tough. Both were impressive. Kennedy was even impressive in helping to break the press. - Don't be surprised to see James Bell get a bulk of his minutes at the power forward spot.

What I learned on my Summer Vacation (Billy Lange) .... Now that we know what Jay is thinking, Raphielle Johnson of NBEBasketball.com gives another perspective. He interviewed new Villanova Associate Head Coach, Billy Lange, learning that ‘Nova found many positives from its recent European trip. Said Coach Lange, "A lot of the guys going into their junior year see that there’s basically no senior class. They’re all taking steps to become better leaders. Mouphtaou was our most consistent performer in all aspects. He went up against great players all trip and did a great job, especially from a leadership standpoint." Cheek’s 34-point outing in the Wildcats’ 94-92 win over Israel stands out, but his performance was about more than just one game. He made jump shots and threes, and that opened up things in other parts of his game. Maalik was able to score in bunches and got used to playing more physical guards. All three will grow as leaders and players as October gets closer, which will benefit Villanova greatly. James Bell is now healthy and [USA Basketball] was a great opportunity for James. He’s getting more game reps and in the final 15 minutes of the last game he played his best basketball." The biggest surprise was Darrun Hilliard. His maturity was a pleasant surprise. Yacoubou got better defensively and engaged quicker as the week went on, and big man Markus Kennedy and redshirt freshman JayVaughn Pinkston also picked things up. It was a great cultural and bonding experience for our team. It was a great evaluation phase for the coaching staff."

Thanks for the Memories, Zeek ... Mike of VUHoops reported earlier this week that Isaiah Armwood, has left Villanova to find a program that more fits his style of play (and desire for PT). The Sporting News reports that Armwood realized he wouldn't receive the quality minutes he had hoped to get playing behind center Mouph Yarou and freshman forwards JayVaughn Pinkston and Marcus Kennedy. Jeff Goodman of CBSSports.com reports that Jay Wright had a heart-to-heart with Armwood after the final game of Villanova’s European tour. Afterward, Jay said, "I was really down. That was tough because he's such an unbelievable kid. One of the best I've ever had."

Terps Like Isaiah? ... Zeek is considering a number of schools for his new home, including Maryland, Iowa, Texas Tech and George Washington. What are basketball junkies at those schools thinking about the prospect of landing Zeek? Maryland homer site, TestudoTimes, had this to say: "While [Armwood] has yet to live up to his billing - averaging only 2.5 ppg as a sophomore last year - he did play 17 minutes per game for a pretty good (at times) team (and possessed pretty high O-Reb% and Blk% rates). But he was obviously a clubhouse leader; he was Villanova's captain for the upcoming year. More importantly, he's 6-8 and talented. Recruiting prospects be damned: Maryland isn't in the position to turn down that proposition. He's a combo forward, hovering in between the 3 and the 4 much like Amile Jefferson, but size is size. (Also, I'd love be able to call a player on Maryland "Zeek.") He would have to sit out a year (unless he received an unlikely waiver), meaning he'd enter the program next season, the same year as Jefferson would play his first year. And yes, there is some thought, however speculative it may be, that Villanova is just clearing space for Jefferson, given that they need the scholarship space and Jefferson and Armwood are similar players. But that's a good enough consolation prize for me. Jefferson, as good as he is, probably wouldn't have a significantly greater impact right away than a junior with a year of practice with the Terrapins under Turgeon. 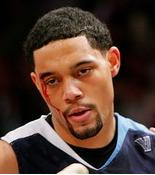 Did Coach Really Say that About Scottie??? ... Philstar.com reports from Manilla that "Scottie Reynolds is not the guy to lead Talk N Text to the promised land against Petron,and will reintroduce Maurice Baker tonight as the Tropang Texters try to keep their title and Grandslam hopes alive in Game 6 of the PBA Governors Cup at the Araneta Coliseum. The gamble to bring back Baker stemmed from Reynolds’ so-so showing in the finals, most especially in Game 5, when he could only make five points in 33 minutes of play as the Blaze Boosters zoomed to a 93-80 victory and move a win from clinching the crown. Baker played a total of eight games for TNT, his last in mid-July after Reynolds was brought in to take over. Although Reynolds did help Coach Chot Reyes squad in barging into the best-of-seven finals, he seemed to lack the trait needed to tow the Texters all the way to the championships and pull off a Grandslam. Reyes had actually hinted that a major change was going to happen when he expressed his disenchantment with Reynolds in Game Five, lamenting that while Anthony Grundy of Petron is doing well, his import [Scottie Reynolds] "sucks."

Savon Continues To Impress ... NBEBasketball’s Alex Schwartz reports that in the inaugural Franchise Classic in the Bronx, NY, "Team New York defeated Team USA, 146-138. Connecticut- bound Omar Calhoun led the way with 34 while Kyle Anderson and Villanova-commit Savon Goodman added 28 and 26, respectively." [Editor's Note: with defense like that, perhaps The Matador Classic would be a better name? ¡Ole!]

Amile, Have We Told You Lately That We Love You? ... Rick O’Brien of Philly.com reports that Villanova target, Amile Jefferson, completed an unofficial visit to North Carolina State this week. Next week, he travels to California to play in the Boost Mobile Elite 24 Hoops Classic on Aug. 26-27. While there, he will visit UCLA. ‘Nova commit, Savon Goodman, also will play in the Boost Mobile Elite 24, and hopefully will remind Amile why he should commit to ‘Nova.

International Incident Averted ... ESPN reports that "Georgetown coach John Thompson III said he has made peace with the coach of a Chinese basketball team over a bench-clearing brawl and denies the melee carried any political connotations.Thompson said Saturday that he met with the Bayi Rockets' coach on Friday and they shook hands and chatted about basketball and other matters.Thompson doesn't believe Thursday's brawl in Beijing had any political overtones. The Rockets are affiliated with China's military, and the fight seemed to embody often contentious U.S.-China relations on the second day of a highly publicized visit by U.S. Vice President Joe Biden."