Share All sharing options for: History: The Sinful Seven 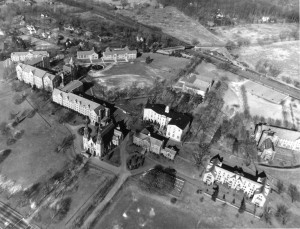 Prior to 1948, there were no real regulations to enforce the "amateurism" of college athletics. Schools and their boosters offered all sort of benefits to high school stars in order to convince them to enroll and play football.

In those unregulated years, Time magazine reported that a halfback was paid $10,000 (almost $90,000 in today's dollars) and packages involving spending money above room, board and tuition were commonplace. Some players would even receive bonuses for staying in school until their senior year. All of it was acceptable and considered part of a player's scholarship at the time.

Until 1948, when the NCAA unanimously passed what was called "the Sanity Code," a dramatic limitation of the benefits that athletes could receive. Athletes could be provided with free tuition and one free "training-table meal" per day while they were in season. There was no Committee on Infractions or other enforcement mechanisms.

In 1950, however, the NCAA sent questionnaires to member institutions to see how the Code was being implemented and seven schools chose to be honest. The media dubbed them – Villanova, Maryland, Boston College, Virginia, Virginia Tech, The Citadel and VMI – "the Sinful Seven," and only one of them, Maryland, was a major football power at the time. Of the seven, four had losing records in 1949, with Maryland, Villanova and Virginia being the only winning teams.

The only possible penalty for non-compliance was expulsion of the non-conforming schools from the NCAA, but even expulsion required a two-thirds majority vote of the organization's Executive Committee.

A trial of sorts was held in January of 1950 at the Commodore Hotel in New York City, where UVa president Colgate Darden Jr. represented six of the Sinful Seven in defense. The Citadel did not attempt a defense, instead offering their resignation because they refused to "to lie to stay in the association."

Maryland's president, H.C. Byrd, was another leader for the seven, managing a campaign against the Sanity Code. At the Commodore Hotel, Byrd famously asked the assembled, "Does Ohio State want to vote for expulsion of Virginia, when Ohio State has facilities to take care of four or five as many athletes as Virginia?"

The shocking thing about the situation was that, with the exception of Maryland which had a very large scholarship program, none of the sinful seven were among the great football factories of the time. As one writer puts it, "it was like a teetotaler announcing that he was about to open a liquor store."

Nonetheless, the administration at Virginia was adamant about their position against the Sanity Code and had previously withdrawn from the Southern Conference in 1936 over a disagreement with the Graham Plan. That plan was named after the president of the University of North Carolina, who wanted to disallow the use of athletic scholarships and limit recruiting of athletes to encourage the selection of teams from the student body. It ultimately only lasted in the Southern Conference for one season, but it was a harbinger of what was to come with the Sanity Code.

The Sinful Seven took a hard stance — they would not deny their sins and they would not guarantee compliance. On Saturday, January 12, 1950, at the Commodore Hotel, the committee recommended the expulsion of the seven schools from the association. A motion was made to vote individually on the schools, which failed – had that succeeded, it might have become apparent to the assembled that Boston College was virtually in compliance with the Code by that meeting and that Villanova was well on it's way.

Nonetheless, when the votes of the 136 members of the NCAA Executive Committee were tallied, only 111 had voted for expulsion. Karl Lieb, then the president of the NCAA, announced that the motion had passed until some of the 93 delegates who had opposed it reminded him that 111 votes was 25 short of the two-thirds majority needed.

The Sinful Seven were saved and the Sanity Code had been sapped of it's power.

While Midwestern and Western schools were among those who voted against the seven, they were saved by southern and northeastern NCAA members, who were largely opposed to the code by that time. Many of those schools believed that enforcement should be left to the schools themselves or to their conferences.

The following September, North Carolina and NC State announced that they were no longer complying with the Sanity Code, and in January 1951, the Code (which had lost its teeth anyway) was repealed.

Leib said at the time, "I predict we will have chaos in college athletics."

The NCAA would assume power to regulate the scholarship standards again in 1956, but with new methods of enforcement. Expulsion would not be the sole method of enforcement, and there would be no more 136-representative votes.

The University of Miami will be penalized under a direct descendant of the 1956 rules for the willful disregard of their obligation to enforce and comply with NCAA regulations regarding improper benefits to players. While the Hurricanes are the NCAA bad-boys of today, it all started in 1948, when a small Catholic school just outside of Philadelphia decided that some of their football players deserved more than free tuition and a hamburger a day during the fall.

Miami could get the "Death Penalty," a term used when the NCAA hands down it's harshest penalty, for their indiscretions. Even the death penalty, a two-season ban from participating and other restrictions on scholarships, home games and coaching hires, pales in comparison to the fate faced by Villanova in 1950.

The 'Cats, who had at that time had been to three bowl games, were within 25 votes of losing their place at the NCAA table. Without that membership, there would be no 1985 Basketball title, 1971 or 2009 Final Four, 2009 Football title, or any of the track and field championships that came thereafter.

Without that membership, it is likely that Villanova would still be a small and unremarkable commuter school for the Catholic students of Philadelphia, and not much more. It was through athletics, afterall, that Villanova built relationships and became associated with the other notable eastern colleges.

In 1950, however, Villanova rolled the dice along with Maryland, Virginia, Virginia Tech, Boston College, VMI and The Citadel, to challenge the NCAA's rules against compensating athletes – and they won. If only for a short while.

The next time you find yourself wondering why the NCAA is debating the merits of cream cheese and peanut-butter, remember that it all started with a few extra incentives that Villanova offered to football players.