Can the 'Cats Afford Pay-for-Play?

Share All sharing options for: Can the 'Cats Afford Pay-for-Play? 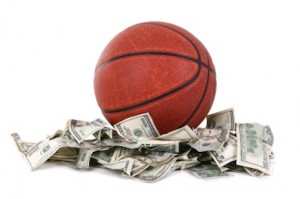 "The NCAA formulas used to determine student-athlete stipends are not appropriate," USC Athletic Director Pat Haden said to USCTrojans.com. "Having interviewed 15 different athletes and broken down their stipend against their bills, they are left with about $5 per day for food. I just do not think that is right." ﻿

Haden estimates that the additional "cost-of-attendance" stipends, being called "pay-for-play" by many, that have been discussed throughout Division I athletics this summer would see his athletes receiving an additional $3,300 or so per year. That number would not be the same for every school, as the cost of living, and therefore the cost of attendance, are notably lower at rural schools.

For a number of athletics programs, the cost of an additional $2,500 to $3,500 per athlete seem small until you recognize that Title IX and other regulatory concerns would likely leave schools paying out that sum to every student attending on an athletic scholarship. That means that women's water polo players would get the same deal as five-star men's basketball recruits.

While some have spent the summer months since the Big Ten first proposed the rule change debating it's merits -- it could be a slippery slope back to the Sinful Seven era of player payments -- others have wondered just how affordable the system would be. For schools like Ohio State and Texas, that generate truck-fulls of cash in excess of their athletics expenses on an annual basis, the decision to pay out a few extra million dollars per year is not one that would cause a university president or A.D. to lose sleep. For the vast majority of Division I athletics departments that don't turn a profit, however, a move toward such a system could make them see red (ink).

According to the University of Washington, who sponsor 19 varsity teams, the cost of pay-for-play could be as much as an addition $1million per year. Larger athletics departments would see even bigger expenditures.

Villanova does not have an official position on the issue. A university representative tells VUhoops that, "we will continue to gather all the information and details on the proposal before coming to a final conclusion on where we stand."

There is a lot of gathering to do, since no single proposal or system has been detailed at this point. We don't know if it would affect FCS football -- the members of which generally look to limit cost exposure -- or whether additional money would be made available to students currently receiving partial scholarships, or even how the cost of attendance would be calculated.

When asking for the current financial numbers and scholarship counts for Villanova athletics, we were referred to the most recent EADA (Federal Department of Education) report from Villanova. From that we learned that Villanova claims over 600 participants in varsity athletics (somewhat inflated by individuals who may participate on multiple teams), and that the total value of student aid to athletes is $9,301,676 in the latest report.

From the financial aid offices' figures, we estimated that the value of a full athletic scholarship currently is around $52,450 per year. That means that approximately 177 full-scholarship equivalents are offered to athletes each year by Villanova. Male athletes receive about 93 scholarships while female athletes are receiving about 84 every school year.

Still less than what the University of Washington is estimating their cost at, and if partial scholarships were left unaffected by the change, or if FCS football scholarships did not change, the amount could be lower.

As of the last EADA report, Villanova claimed a total expense of $27,688,127 for all athletics teams. The only program that turned a profit was Men's basketball to the tune of $1,535,449. The other programs all show a break-even, but that is largely because institutional subsidies are counted as "revenue" by most schools -- it can be assumed that the majority of the programs run at or near a 100% subsidy. That puts the athletics balance sheet at over $26 million dollar lost every year.

The cost of pay-for-play puts that loss somewhere close to or exceeding $27 million per year.

With a new Big East TV contract on the horizon, however, new revenue coming in, just on the basketball side might be sufficient to cover the difference -- even with the potential addition of a Bowl Subdivision football program. According to Brett McMurphy of CBS, the value of the most recent proposal from ESPN that the league rejected would have paid basketball members between $2.43 and $3.2 million dollars per year (football schools would receive between $14.5 and $16.93 million). Villanova currently receive somewhere around $2million per year from the Big East television contracts.

The answer to "Can Villanova afford pay-for-play?" depends heavily on whether the administration is happy to continue the current level of institutional subsidies. If so, they will not need the additional revenue from the next TV deal to cover program expenses and the increase in revenue should cover the costs of the increased stipends.

While Villanova is in a position where television money will most-likely allow the athletics department to offer competitive scholarships in the event that Division I moves to a "full cost-of-attendance" model, schools from mid-major conferences with vastly-smaller television pay-outs will likely still struggle to keep up. While Villanova can expect a television-revenue increase in the next few years, programs from the Atlantic 10, CAA, or Conference USA may not; and at the same time those schools may have as many, or more, scholarship athletes as Villanova.

In a new world of "cost-of-attendance" scholarships, the key to Villanova's survival is it's connection to a major conference and access to that revenue.