As part of the "welcome back" festivities for students returning to campus this week, Villanova threw a barbecue on the quad. At some point during the festivities a "flash mob" broke out. If you didn't know, a flash mob is "a large group of people who assemble suddenly in a public place, perform an unusual and pointless act for a brief time, then disperse." 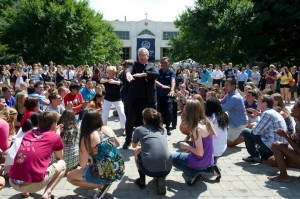 Notably, this flash mob had both university president Father Donohue and head men's basketball coach, Jay Wright involved – they become visible in the video closer to the end. You'll also notice JayVaughn Pinkston in the lower right of the video, he looks somewhat confused by what is going on until Baker Dunleavy appears to explain it to him.