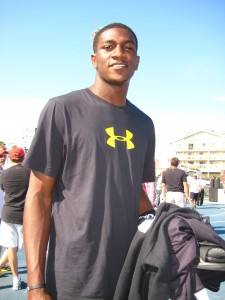 Savon Goodman, who had previously given his verbal commitment to play for Villanova, has recently re-opened his recruitment and will listen to offers from other schools. The talented 2012 Small Forward has not ruled out playing at Villanova, but his success and work on this summer's circuit has brought him a lot more attention than he had previously been receiving.

According to MaxPreps' Chris Stonebraker, "He decommitted from Villanova. He's making himself available to be recruited by other schools."

Goodman was in Southern California for the Boost Mobile Elite 24 Hoops Classic, a showcase game that was being held in Venice. He was joined out there by fellow Villanova recruiting target, Amile Jefferson.

Prior to his commitment, Goodman reportedly had offers from Duke and Kentucky in addition to Villanova. He was high on Kentucky before giving his verbal to Villanova, and he may be considering UK once again. Scout.com also lists offers from Maryland and Penn State, both of whom have new head coaches and perhaps new recruiting priorities, since Goodman committed. It is not clear which schools Goodman is now considering.

According to Keith Pompey of the Philadelphia Inquirer, Goodman is also transferring to Constitution High School in Philadelphia from Academy New Church. He has not contacted his former coach at ANC, Kevin Givens, who could not confirm any information about Goodman to reporters, but did say that he had fielded calls from Wake Forest and Virginia Tech and has tried to contact Villanova.

It also seems that the rumors that Goodman would re-classify to the class of 2013 have resurfaced today, despite his denial a few weeks ago. The speculation behind that and this transfer have revolved around questions of his academic standing.

"The reason is exactly what people have said, because of the academic approach that we have." Givens told the Inquirer. "That's a priority for us, so there may be something to that."

This report comes to us from reader Len Velez, who spoke to Stonebraker yesterday in Venice, California.

According to Zagsblog.com, Villanova is still in the mix for 2012 forward Amile Jefferson:

"[Villanova] is definitely a school that factors into my thoughts, being a hometown school," Jefferson said by phone from the Boost Mobile game. "Being able to recruit guys out of Philly has been great, so it’s been really good so far."

"I’m still pretty wide open," Jefferson said. "We’re still looking to see who else we’re going to visit before we make a decision."

That said, I don't think Jefferson has said anything negative about any of the schools he has been asked about. His comments above, though different, have the same tone as what he said earlier in the summer about West Virginia.