Did UCLA Get Involved with Goodman?

Share All sharing options for: Did UCLA Get Involved with Goodman? 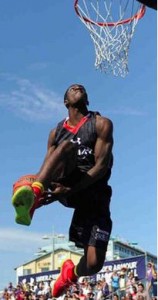 According to Dave Krupinski, the Digital Media Director at the Hoop Group (a company that has it's finger on the pulse of AAU basketball and recruiting) and operator of JohnnyJungle.com, the culprit behind the de-commitment of Savon Goodman may have been a late push by UCLA to reel him in as a package with his NJ Playaz teammate, Kyle Anderson. UCLA has been hard after Kyle Anderson, whose top five also includes Seton Hall, St. Johns, Georgetown and Florida.

This summer, Savon Goodman switched his AAU allegiance to the NJ Playaz team that Anderson plays point guard for. Presumably, UCLA now believes that in order to land Anderson, they will have to bring in a friend and teammate as well. That said, UCLA is also trying hard to recruit Anderson's friend, Shabazz Muhammad, one of the top 2012 shooting guards. Locking down Anderson and either Goodman or Muhammad would likely propel UCLA to the top of the recruiting rankings.

According to sources, Savon Goodman visited the UCLA campus while he was in Southern California for the Boost Mobile Elite 24 competition. It isn't clear yet whether the visit was classified as an "official" one for NCAA purposes, but it has been suggested that it was (Update: Krupinski now confirms the visit was unofficial).

We also know, thanks to Krupinski, that Savon Goodman participated in the Boost Mobile event because of his relationship with Kyle Anderson, who at 6'8" is considered both nation's top 2012 point guard by Rivals and the number-2 small forward by ESPN.com. Goodman traveled to California with Jimmy Salmon, the director of the NJ Playaz AAU team.

Prior to this summer, Savon Goodman had played AAU ball with the Team Philly organization that former Villanovans like Reggie Redding and Kyle Lowry emerged from. Though some of the current NJ Playaz talents have been targeted by Villanova, none of the players from their 2011 Summer U17 team were considering Villanova, except Goodman, who committed before joining the club.

Is it a done deal that Goodman won't change his mind and commit to Villanova again in a few months? Some reports have suggested that that is the case, but there is no official word from Goodman at this time. His recent behavior, however, must be a little troubling to observers -- changing AAU teams is not unheard-of for high school stars, but now de-committing and transferring high schools (without so much as a courtesy-call to his former coach), seem like drastic moves for a 4-star player in the weeks leading up to his senior year in high school.

Whatever it is, something is brewing over in the Goodman camp. If the UCLA rumor proves true, it is likely that switch to join the NJ Playaz organization has been very central to this story.

UPDATE 11:30am:It also appears, according to sources, that Goodman's grades have not been very strong at Academy New Church, and he may not have the academic credentials to get through the NCAA clearinghouse. A move to transfer to Constitution High School might be an effort to improve his academic profile enough to avoid a year at prep school.