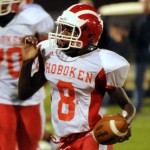 Spencer Perez plays quarterback and safety for Hoboken High School in New Jersey and he has recently appeared on Villanova's radar for 2012. He played in a run-heavy Wing-T offense last season, but will be given the opportunity to throw the ball a bit more this season as Hoboken looks to use the passing game as a means to set up the run. Perez is a student of the game who believes that, "I have to know all 22 positions on the field. Not just the offensive ones, but what the defense is doing as well," in order to succeed.

The 6'2" and 185-pound Perez has scholarship offers from the Military Academies and his experience with that Wing-T offense would likely let him translate well to the triple-option systems run by those schools. He also has heard from Temple, Cincinnati and Delaware in addition to the Wildcats.

Last year, he threw for 22 touchdowns and only two picks. If he continues to shine with an increased emphasis on the passing game, the Red Wings' quarterback will likely blow up.

At the moment, however, his recruitment is wide open and we may wait until February to find out where he lands.