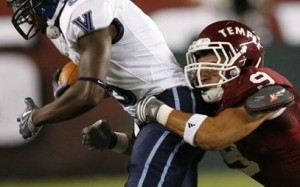 It is almost 730 days since the last Villanova football victory at Lincoln Financial Field. Last year's installment was the first Temple win in the series since the Wildcats' program was re-booted in I-AA, and the 'Cats lead the all-time series against Temple 16-13-2. Those 32 meetings are good enough to put the Owls in a tie for third-place amongst the programs that Villanova football has played the most since it's founding with the University of Detroit. The schools exceeding that number include Villanova's long-dormant rivalry with Boston College at 45 meetings, and the University of Delaware, who will play their 45th game against Villanova in November.

Suffice to say, the cross-town game, though not played regularly between 1980 and 2009, has been an important one for both programs.

The Owls, like Villanova, have undergone some changes in the offseason. A few key players have been lost, like New York Jets' rookie defensive end Muhammad Wilkerson, Philadelphia Eagles safety Jaiquawn Jarrett, and quarterback-turned-tight end Vaughn Charlton. Last year's Mayors Cup starter at quarterback, Chester Stewart, and cornerback Kee-ayre Griffin were both suspended for week 1 for a violation of team rules as well.

Perhaps more importantly for the Owls, the change from Al Golden to former Florida offensive coordinator Steve Addazio, a move that brings with it a transition to a spread offense and, the Owls hope, higher scoring. Though many question Addazio's ability to succeed in revamping the Temple offense when his team struggled so mightily to score at Florida last season, at Temple he will hardly be faced with the blazing speed of SEC defenses.

That spread offense is likely to be run by junior quarterback Mike Gerardi, though Temple won't name it's starter yet, and it will remain possible that sophomore Chris Coyer will be handed the reigns on Thursday. Backing them up will be former Heisman candidate Bernard Pierce, who has once again won the starting job at running back.

Temple also figures to make extensive use of H-back, Evan Rodriquez, who will be one piece in the Owls' attempt to establish a more consistent passing game. Rodriquez is just one of a few big targets that Temple will have on the field, as well as Rod Streeter and Deon Miller, who are all at least 6-4 and difficult to cover in the red zone.

Addazio brought Chuck Heater along with him from Florida, where Heater served as co-defensive coordinator and defensive backs coach. Despite the change, they will keep the same 4-3 base scheme that they had run over the past few seasons with Mark D'Onofrio calling the shots. The losses of Wilkerson and Jarrett will sting a bit in their front-7, but the Owls will move on with different faces.

The key returner of their defensive line is now Adrian Robinson, a 250-pound senior who logged 3.5 sacks last season and has been a fixture in that position. He will be joined by Morkeith Brown at the other end spot on Thursday, while the middle of the defensive line features two 300-pound tackles in Kadeem Custis and Shahid Paulhill. The frontline looks to be in rather good shape despite the losses.

The linebacking corps took a bigger hit, with Tahir Whitehead being the only returning starter at the position. Last year's middle linebacker, Elijah Joseph, will be replaced by Stephen Johnson, while Ahkeem Smith has recently been moved by coaches from a back-up runningback role to weakside linebacker. He was asked to transition to linebacker after it was clear that he would not see many carries on offense, and the coaching staff was very pleased with the junior's performance in camp.

Among defensive backs, Temple will have to hope that Deonte Parker can fill Jarrett's role respectably. They are also missing Kee-Ayre Griffin at corner to his suspension, which will likely hurt more than any other loss since it occurred recently. Griffin had 51 tackles and one interception in 10 starts last season.

If I told you not to bet on the Wildcats, would you do it anyway? Villanova will start a two freshman and a transfer on the offensive line this year, and it will likely be one of the smallest offensive lines that the 'Cats have put on the field in quite some time. Temple is likely to try and take advantage of that line and get to the quarterback or ballcarrier.

The challenge for Villanova on offense is to provide enough protection for a young quarterback to allow him to find his receivers downfield. If the line cannot do that on it's own, the 'Cats may have to provide help from the tight end position – potentially pulling a playmaking receiver like Mikey Reynolds off the field to do so.

In the running game, gigantic sophomore fullback Ransford Quarrie will be instrumental in opening up holes for the Villanova tailbacks. He may also see his number called to carry the ball in short yardage and goal line situations. If the running game can be effective, it will further help the young quarterback.

Villanova is unlikely to score a lot of easy points against Temple. Instead, the 'Cats will lean on their defense to keep their opponent off the scoreboard and give their offense as many opportunities as possible to attack.

Villanova's defense will be strong along the defensive line, will all three players returning having starting experience (though, Antoine Lewis will slide over to nose tackle this season, replacing Thomas Weaver). Keelan Malone, Joe Makoid true freshmen Pat Williams and Jordan Hunter will also see action in the frontline rotation.

The linebackers are the bigger question mark. With no starters returning, it appears that the 'Cats will take the field with true freshman Dillon Lucas at middle linebacker. On the outside, Devon Bridges and Jeremy Rodriguez are slated to be the starters, but Pat Haggerty was a revelation in the offseason and the coaching staff is likely to get the junior into the game for a decent amount of snaps.

The secondary will again be strength-by-numbers in the 3-3-5 scheme and that should help the 'Cats take advantage of their speed on defense and get stops.

Last season's game was a close one, coming down to the last minute, and if the 'Cats can force Temple into a defensive battle, this year's edition could be very similar. However, if Temple is able to turn their offense up to 11 and have their way with the Wildcats' defense, it may be very difficult for them to keep up.

Temple is a big test for a 'Cats team that is trying to rebuild on the strength of a superb FCS recruiting class. Don't expect a dominating win. Don't expect a win at all, in fact. Anything can happen, of course, and if things go the way Andy Talley and his staff hope, a win might the the result. Even in a loss, however, look for the signs that the 'Cats can build on – a close finish, strong defense and perhaps a few flashes on offense.

Not every team will be as big or as deep as Temple. Once FCS play begins in week two, the 'Cats will be better equipped for a level of competition where an undersized and under-experienced offensive line is par for the course.

You have to dig a foundation before you can build a house.

Check back before kick off and I will have more insider updates on the team. We will also be covering the game live from the press box at Lincoln Financial Field.

You can also check out our Villanova football season previews: