Share All sharing options for: PIERCING the Defense: Nova loses 42-7 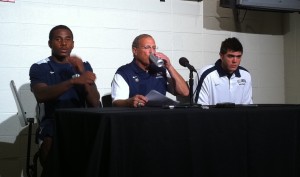 Thanks to the Big East, Villanova football has never faced so much scrutiny in a season opener, but it wasn’t the media and fan pressure that got to the wildcats, it was a talented defense. Once the Temple defense got going, it was hard for Villanova’s young offensive line and quarterback to get much done. The Wildcats lost their season opener and the Mayors Cup, 42 to 7.

The ‘Cats started strong, however, and after getting the ball on the opening drive they immediately began moving the chains. Mikey Reynolds carried the ball on a reverse for 10 yards on the first play. The cat’s would take the ball all the way from their own 30 to the Temple 27, before losing their cool and turning the ball over on the first of Dustin Thomas’ three picks.

The ‘Cats couldn’t get anything going on offense, logging only 13 first downs to Temple’s 23, and only 153 passing yards.

While Dustin Thomas recorded 109 pass yards, the throw of the night probably belonged to wide receiver, Dorian Wells, who tossed the ball 44 yards to Thomas on a second quarter trick play, to move the ball from the Villanova 31 to the Temple 25. That drive ended with Thomas fumbling the ball — which was then recovered by Temple for the turnover.

In all, the ‘Cats had three interceptions and four fumbles on a night that showcased their inexperience.

"Temple's really good. I think they have as good a Temple team as we have seen in three years," Villanova head coach Andy Talley stated."

Two freshmen started on the offensive line for the Wildcats, Kyle Wallace at left guard and Vince Kowalski at right tackle, and their growing pains were apparent. The offensive line gave up three sacks, and Thomas was constantly under pressure. Those struggles forced Thomas to make more plays with his feet than with his arm — rushing for a team-high 59 yards, including a long 31-yard run in the second half.

For the most part, Talley stuck with his starters, including Thomas, for the entire game.

"I think if we were a more experienced football team we would have put our guys in there but the left tackle, left guard and right tackle and tight end and all the running backs and quarterback were first year players. So we really wanted to give them repetition and let them stay in the game to just work through this. Very painful, but it was necessary."

It also didn’t help Thomas to lose his biggest and best target, Norman White, to a season ending Lisfranc fracture. Joe Price did an admirable job filling in, however, and had three catches for 39 yards, and was a reliable target. Mikey Reynolds may have emerged as Thomas’ favorite target, however, running out of the slot — he had 51 yards receiving and a team-high 5 catches.

For Thomas, the hardest part of the game was the outcome.

"I never like losing," he told reporters. "Doesn't matter if I'm a first-year player or a senior but losing is the worst feeling in the world." 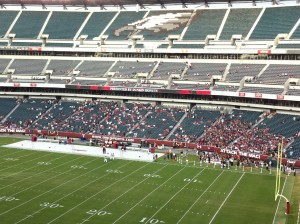 Villanova scored it's only touchdown on a 4th quarter drive that started from kickoff after Temple took the score to 42-0. Starting at their own 29 yardline, Nova moved the ball downfield for the score. Dustin Thomas used Joe Price and Mikey Reynolds to move the chains, as well as making good use of his own legs. The scoring play was a 4-yard quarterback draw on 2nd and goal, making the young quarterback the only Wildcat to see the endzone.

"We never really challenged them in the game," Talley noted. "So we never put enough pressure on them at any point in the game to test their metal. So we never really tested them. I would allude to the fact that starting 17 first year players [including upperclassmen without game experience] on our part was probably part of the reason why we weren't able to really challenge them in any situation."

"I knew the game could get away from us early and by not testing them at all, we let them off the hook."

Bernard Pierce, who was quiet in the first two Mayors Cup games, was extremely loud for the Owls tonight. While it was premature for Temple to tout their runner as a Heisman candidate last season, he had a tremendous night. Pierce burned the Villanova defense for 147 yards on 20 carried (an average of 7.3 yards per carry) on his way to three touchdowns.

Those stats are impressive on their own, but Pierce did that while suffering from an unknown illness. After the game, he was taken to get an IV drip because he wasn’t feeling well.

"Pierce is a really good big time running back, and it's a nice change up with 22, Matt Brown. He's a really good player as well," according to Talley.

His own head coach, Steve Addazio was just as glowing about the star running back, "I think he's as talented as the backs I've seen in any of the other conferences I've been in. The last stop I was at was a tremendous conference, and he's got all that talent."

"He's got the size, speed, and he makes you miss, he has those qualities, and like we've said Bernard's been working real hard to being [sic] able to play through these physical games and finish and work through injuries."

Highly touted freshmen making their debuts tonight for the Wildcats included Kevin Monangai, who had three carries in the second half for 13 yards, and Jamal Abdur-Rahman (pronounced "Ahb-door-ROCK-mon") who had 44 yards on 2 kick returns and 2 carries for 6 yards. On defense, Dillon Lucas recorded 9 tackles as the starting middle linebacker, and Shane Harris had one at safety.

John Robertson, one of two freshman quarterbacks to enroll for this season, also made a cameo appearance in the second quarter, when Villanova ran it’s only play out of the wildcat formation.

Though he is a quarterback, Robertson was not given the traditional red "no contact" jersey during preseason practices. Instead, Robertson, who wears number 19 regularly, practiced in a blue number-4 jersey — a clear signal that when the wildcat package was on the field, he is charged with trying to emulate the departed Matt Szczur.

In his one rushing attempt from scrimmage, however, the Temple defense was ready and held him to just one yard. Robertson did not play another down.

One outstanding defensive performance belonged to Craig James who made 10 tackles in the game and seemed to be involved in a lot of plays, including a blocked-punt. The defense also saw two linebackers recording unassisted sacks in Devon Bridges and Delano Ferguson. A third sack was recorded by defensive ends Rakim Cox and Keelan Malone.

"We are a rebuilding team," Talley stated. "It's never really good to play them [an FBS opponent] when you're cycling back up in building mode because things can cascade on you and then all of a sudden it just compounds itself."

"We can learn a lot from this and I would stay positive, especially with a young team. If this were an older team, and they got beat 42-7, I'd be ripping some people up. We have a long season to go and a lot of things to look forward to."

Temple used three quarterbacks in the game, though only starter Mike Gerardi recorded a pass attempt. Once they pulled their starter in the second-half, Temple largely relied on the running game to burn the clock and end the game, which took only 2 hours and 49 minutes to complete.

"[Gerardi] did a great job, he came out here, he managed the game, real good leadership in the huddle," Addazio gushed. "We wanted a guy to come out here and demonstrate leadership and he did that, and I think it was about a week ago, he picked that up, and that was evident tonight."

The official attendance was 32,638, but to an observer, it was hard to find a single section that was filled to capacity. It would be the second-largest attendance for a Temple football game at Lincoln Financial Field, surpassed only by a Penn State visit in 2007.

The first Talking Villanova Football With Andy Talley Radio Show of the year is set for Tuesday, Sept. 6. The show will take place at Mixx Restaurant from 8-9 p.m. Mixx is located at 789 East Lancaster Avenue just down the street from the Villanova campus.