Share All sharing options for: Anderson Lands in Italy 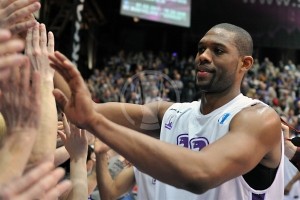 Last season, Dwayne Anderson was a played for BG Gottingen in the German league, but after the season was over, he ended up in disagreement with team management over his salary and ultimately Gottingen opted to move on without him. Anderson won't be sitting the season out, however, and he has signed a contract to play for Piacenza of the Italian LegaDue -- the second division of basketball in that country.

Though it seems there were initially some concerns about Anderson's physical, he has been medically cleared to play for Piacenza. Apparently he had shown heart problems during some early work outs that gave the team pause about his ability to continue playing. Roughly translated, the team president's statement said:

"For us it is a known delighted why replace a champion like Anderson is very very difficult when the team is complete, I sincerely hope that the audience responds enthusiastically and we follow in bulk! Up to now I can say that the subscription campaign we had a good response, were bought almost 300 pieces, in view of the season are extremely confident! "

From a Dirty Bird to a Cardinal

Former Villanova wide receiver Brandyn Harvey spent the 2010 season with the Atlanta Falcons, where he signed out of college as an undrafted free agent. He never saw action in a regular season game with the Falcons, however, and at the end of August training camp, he was handed his pink slip by the organization that brought up fellow Villanova receiver, Brian Finneran.

This weekend, Harvey managed to catch on with a new team, however. The Arizona Cardinals swooped in and signed him to join their practice squad to open the 2011 season. From the practice squad, Harvey will have a chance to work his way onto the field. Practice squad players don't get paid the same as the men who suit up on game days, but they are always free to leave when another team has a need at their position.

Injuries during the season have often brought players up from a practice squads to a team's active roster.