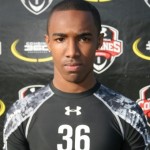 Stacey Bedell, the Long Island speedster, had second thoughts about his early July commitment to Villanova. The 5’9″ and 175lb running back, "felt he committed to Villanova too early and now he wants to be recruited by other schools," according to his coach, Paul Longo. His father called the Villanova staff to inform them that he was re-opening his recruitment over the Labor Day weekend.

He was offered a scholarship after impressing coaches with his 4.48 time in the 40 yard dash at a football camp this summer, and accepted shortly after. He was also being recruited by Stony Brook and had an offer from Army at the time of his commitment.

One of the schools expected to get involved now, is fellow CAA power James Madison, who are in the process of completing a very high-end facilities upgrade on campus. JMU appears to be Bedell's current leader -- he is reportedly not considering Villanova anymore.

Bedell was quoted when he committed to Villanova, saying that he was excited to play for a program that was heading to the Big East. More recent speculation about conference realignment may have put doubt into Bedell's mind about the program's future.

Villanova's uncertain conference future, combined with training facilities in need of a dramatic improvement have not helped the program's cause. Nonetheless, the Villanova coaching staff has done a tremendous job of overcoming those circumstances over the past few years. According to Andy Talley, there are Division III programs that are upgrading with brand new training facilities, and an investment in the future of Villanova football is required to ensure the program's future at any level.

ESPN, Rivals and Scout all rated him a 2-star prospect.

Villanova now has 9 recruits in the 2012 class, with no word yet on whether or not linebacker Corey Majors will be joining the program after his prep school year is over. The nine recruits still committed to Villanova football are: