ESPN recently asked a slate of college basketball coaches about the toughest places they have every coached. Jay Wright was on the panel and said that when he was an assistant at UNLV, New Mexico State had the toughest arena. They closed the article with a list of each coach's wishlist venue -- a place they would like to coach a game, if the opportunity presented itself.

Rick Barnes and Tom Izzo both picked the Palestra, a rather attainable venue, though a classic. Presumably the hold-up in scheduling a game there is the likelihood that their opponent would be Penn.

What about Jay Wright? He picked Cameron Indoor Stadium, the home court of Duke University men's basketball (and a Palestra body-double). 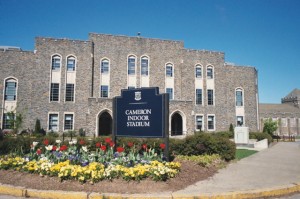 Jay Wright has never coached against Duke in Durham, and though the Blue Devils have made a few trips to Philadelphia, most have been to face the Wildcats' Big 5 rival, Temple. A home-and-home series with Duke would be a major plus for a school that often faces severe criticisms of it's non-conference scheduling.

Fans would embrace a scheduling agreement with Duke and apparently Jay Wright would like it as well. So why hasn't it happened? Maybe Duke isn't interested. Persistence pays off sometimes, however, and an athletic director who is motivated to make it happen should be working to find a way to get it done.

So Mr. Nicastro, once you sort out all of the conference-drama, lets cross the number-one venue off of Jay Wright's wish list.